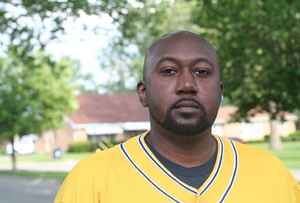 Rick Wade was born in small-town western Michigan, less than an hour from Chicago's South Side. In the mid 1980s while studying at the University of Michigan, Wade gained his first gigs spinning deep underground house at the Nectarine Ballroom, the venue where Jeff Mills was also making his name, for techno rather than for house.

Simultaneously, Wade maintained a successful mix show on WCBN named "Journey To The Land Of House". It was a huge success, as were his subsequent gigs at clubs in and around Detroit. So much so that by 1993, Wade was able to build his own studio and form a label, Harmonie Park.

March 17, 2022
Rick Wade's music is the epitome of deep house. He is one of the most prolific producers of the deepness, do not sleep on any of his records!

what happened to all the other Rick Wade reviews, discogs..

October 3, 2018
can not agree on the 2 postings before, he is not overhyped and make nice smoove tracks with great melodies......
Thanks for that nice music he is doing to entertain us

September 28, 2010
Rick Wade is one of the fastest deep house producers from Detroit. He whips out tracks faster than most. Back in the Day he would come across samples that you would try to trade him out of, if he found them before you. In a matter of no time, would he whip them into shape, only to create a legacy of releases found on Discogs. Don't let the speed of his productions fool you into thinking that it out weighs the quality either.

Rick held back on his first Harmonie Park release until he was sure that it was perfect. In this game, if your first release, or remix isnt worth searching for, you will be playing catch up until you get it right. And we all know the quality of Harmonie Park releases. Rick Wade is known as the "label Starter" Many new labels today rely on the skills and production methods that Rick Wade has taken quite some time to possess.
See 2 replies