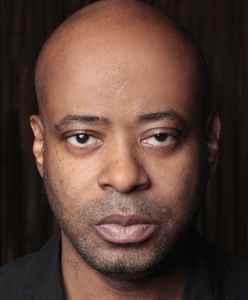 A major electronic music pioneer from Detroit, Juan appeared behind aliases such as Cybotron, Model 500, and Infiniti releasing many classics of Detroit techno.

The 1982 electro track "Clear", recorded by Atkins and Rick Davis as Cybotron, is often considered the first proto-techno track. Continuing to experiment by fusing the extra-terrestrial funk of Parliament Funkadelic with the futuristic rhythms and hard math of Kraftwerk and the progressive dance theorems proposed by Giorgio Moroder, the Model 500 12"s on his own label Metroplex laid the blueprint for Detroit techno.

Along with the tracks made by two schoolmates from the grade below, Derrick May and Kevin Saunderson, Detroit techno quickly made its way across the atlantic and immediately sparked the emerging rave culture and soon after the entire global dance community.

Moving through the later 1980's as Model 500, Atkins continued as one of the most prolific and sought after producers of electronic music throughout the 1990's, culminating in the use of an Atkins' original as the musical bed for the 2000 launch of the Ford Focus 'Detroit Techno' automobile.

Packing clubs nationally from Detroit to NYC, internationally from London to Venezuela, Juan has mastered the art of soaking up new rhythmic elements from contemporary dance music while keeping his unerring, instantly recognizable sense of melody intact.

January 28, 2022
Of course we all got to know the genius of Juan Atkins with his Detroit tracks, but who noticed Techno City on Street Sounds Electro 4? It was a cool track but who would have guessed what the creator of this would go on to do?
Reply Notify me Helpful

THE DON OF ALL DONS. ALL HAIL THE KING. THERE IS ONLY JAUN JUAN!

November 28, 2020
In Juans music you hear no ego,,,,, And still is the don of his own sound... The sound of a human being making music without distractions ;) I love his laungage! Peace
Reply Notify me 2 Helpful

Everything starts with Juan Atkins

Several years ago on the English scene, back in 1989, a hit called "Everything Starts With An 'E'" seemed like a landmark for the European rave generation on the beginning of the nineties, a sign of an upcoming way of life for thousands of kids, the final triumph of Raves. Many years before that, though, about eight to be more precise, a young fellow with a shining Soul and a passion for technology emerged with new electronic sounds and real ground breaking perspective. These English rave kids were wrong at the end: everything starts with Juan Atkins.

It's the difference between knowing it, and making it

In 1981, the Detroit duo Atkins and Rick 3070 Davis released " Alleys Of Your Mind" on Deep Space Records as Cybotron. With 'A Number Of Names Sharevari', it was the start of a very personal view of something really avant-garde on electronic music - futuristic, Science-Fiction driven, kind of cybernetic and even robotic, evoking the undeniable alliance between the man and the circuits, the engines, the machines; however, there was more. Son of the Motor City, this young producer, responsible for venturing in this new World almost before everyone else, like many of his contemporaries, absorbed the heritage of the African-American music through labels such as Motown a platform for the music of Stevie Wonder, Marvin Gaye, Diana Ross & The Supremes, The Temptations, The Four Tops, The Jackson 5, among many others. And there was Jazz.

The initial landmark for Techno

When I had the opportunity to meet them, Mike Grant, Vince Watson and Fabrice Lig all agreed with me on the fact that " Techno City" was indeed the first 'four by four' Techno tune ever. Not only because of its atmospheric & futuristic electronic shape focused on the but because it hided a kind of an ahead-of-its-time personal signature, despite of a structure that nowadays would be seen as rudimental. For the Cybotron connoisseurs it was not a surprise, though: timeless Electro anthem " Clear ", released one year before on Fantasy, was devastating. It brought a unique electronic ensemble, even more obsessed with futuristic style, with all that funky dancefloor elements melted with a magnificent innovative essence.

No hope, no illusions, no UFO's

Strange as it may seem, that new Sound of Detroit emerged like a paradox between the dream of an upcoming generation and a World full of imperfections; between the technological aspect of the machines and the human creation process; it was the duality of circuits and veins, blood and electrons, human and exact parameters. It had a whole new technology concept and a wish for a more human World, though it kept its roots on Soul and art.
Like a new prophecy based on the burning desire for change and evolution, Techno incorporated since its early days all these dreamy elements as an inspiration in opposition to the social environment that always had to face the inevitability of facts of a harsh World, full of hopeless minds. That could be resumed by an expression created by the locals to describe this nude reality, like when 'there is no hope': " No UFO's" - not by coincidence the first released single of Juan Atkins' solo project as Model 500.

The rising of Belleville generation

The first single on Metroplex came out with the classic "No UFO's" and its dark ambiance with obscure basslines, strange synths and a sinister use of the vocals. On the other side, it had a dark Electro-Funk: "Future", played almost instantly by DJs like The Wizard and Electrifying Mojo. The acclaimed D-Mix for " No UFO's" had an even more challenging approach, recommended later by Andrew Weatherall as an essential classic. Not long after that, " Sound Of Stereo" had the collaboration of Sir Cybo and brought the new-visionary paradigm for that music with an obscure climax and sinister vocal chorus. These were the sounds that influenced the whole environment, and more specifically friends such as Derrick May, Kevin Saunderson, Eddie 'Flashin' Fowlkes , Arthur Forest, Santonio Echols, Blake Baxter , Carl Craig, among other talents. The revolution had started.

Suddenly, the Soul and the Sci-Fi were blended together

July 17, 2003
Mr. Atkins was original innovator of electronic dance music and the first Detroit-techno artist ever. His friend Derrick May even named his legendary label "Transmat" after a vocal sample in one of Juan´s tracks.

One of the few true geniuses in modern-day electronic music. He probably invented techno in 1982 with a Cybotron release, but even if he didn't (who cares anyway?) he made some stunning tracks. Totally unpretentious oldskool like 'Make Some Noise', cool electro like 'Night Drive' or 'No UFO's', beautiful relaxing spacy stuff like 'The Passage' or one of his numerous Infiniti-outputtings. The list goes on and on and on (ad Infiniti really!)**.

**= bad pun, I know. but really this is for everyone liking Kraftwerk, Derrick May, Doppler Effect, Drexciya (though Atkins' work is less weird and is less 'rough' as well most of the time), Klaus Schulze (Detroit has a link with Germany I'm sure!!), Aphex Twin's Selected ambient Works Vol. I,...