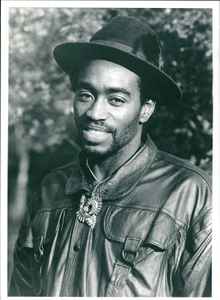 Real Name:
Winston Brown
Profile:
Text below from chapters in the book 'Ruthless - The Global Rise Of The Yardies', the book on Yardie violence by Geoff Small.

Ranking Dread, sometimes spelt as Rankin’ Dread, is thought to have first entered Britain in 1978 where he soon became a fixture at the Four Aces Club in Dalston, east London. Lloyd Coxsone, operator of the Sir Coxsone sound system, was the club owner and gave Ranking Dread a spot as a DJ. His first experiences as a deejay earning recognition were with the Ray Symbolic sound system in Jamaica in the 1970s before moving to London. He released his first album, Girls Fiesta, in 1978 and in 1980 released a popular single ‘Fatty Boom Boom’, however, his recording career was over soon after.

Ranking Dread was born as Winston Brown in 1955 although he was also known by up to twenty aliases including Robert Blackwood, Michael Dicks, Errol Codling and Boyark, or Bowyark. By 1987 Scotland Yard and the National Drugs Intelligence Unit (NDIU) had gathered intelligence files on ‘Yardie mobsters’ in Britain who they believed were out to control ‘West Indian’ crime. Among their hit list was Ranking Dread who they believed to be involved in drugs, prostitution, and gangland murders. It is thought that Ranking Dread left Jamaica as a fugitive, wanted for questioning in connection with a string of crimes which included the shootings of four police officers.

In Jamaica he’d reportedly been an enforcer under JLP (Jamaican Labour Party) don Claude Massop who led a posse in the ‘garrisons’ around Rema, Tivoli Gardens and Denham Town in Kingston, Jamaica. Massop’s JLP aligned group would later become known as the Shower Posse and Ranking Dreads alias of Boyark was linked to the killings of at least 29 drug dealing rivals aligned with PNP (People’s National Party) posses. After jumping bail for one of the police officer shootings he fled to London under the name of Errol Codling in 1978 and after authorities failed to extradite him from Britain a year later, he set up base from an address in Darenth Road, Stamford Hill.

Ranking Dread became a recognised name and face across Black London including Stoke Newington, Clapton, Brixton and Peckham. He also moved throughout Britain and abroad, having set up networks in Nottingham and New York. In fact, Ranking Dread was deported from the United States in 1983 after receiving a conviction for possession of cannabis. From his base in Stamford Hill and Stoke Newington in north London Ranking Dread established a drinking club, a prostitution network, and through armed robbery funded a series of shipments of cannabis to both Britain and the United States.

In 1986 Ranking Dread became Scotland Yard’s number one suspect in the murder of Nigerian drug dealer Innocent Egbulefu who was thrown out of the window of a high-rise flat in Islington, eight floors at a height of ninety feet. It’s thought that Egbulefu double-crossed Ranking Dread and his associates by selling them a consignment of marijuana concocted of herbs and tea leaves. Returning shortly after examining their fake product, the men forced their way back into the flat, during which time Egbulefu ended up plunging to his death. The events had happened so quickly that Egbulefu was still holding the remote-control unit for his television set.

In May 1988 investigative television series, The Cook Report, labelled Ranking Dread as the head of Shower Posse operations in the United Kingdom in their exposé of the Yardies. Programme presenter Roger Cook singled out Ranking Dread as a Jamaican Mafia-like master villain. Cook intercepted him walking down a busy London street, but when these accusations were put to the man himself, he coolly denied them without even breaking his stride. Ranking Dread’s street reputation also did not go unchallenged and at least one-attempt at taking over his business interests was documented whereby a British born teen attacked him with a machete in a London shebeen.

He had several very close scrapes, some people putting his escapes down to his belief in Obeah, a folk magic and religious practice in the West Indies derived from West Africa. Some gang members believe that occult rituals can protect them in gang fights by cursing their rivals, and even protect themselves from bullets. It seems though that one thing they cannot protect against is law enforcement.
On 14th April 1988 police officers raided a shebeen at Clapton Way, east London. The derelict property owned by Hackney Council had become a focal point for serious and organised crime, particularly the trafficking of cocaine. Following several weeks’ surveillance, a team of thirty-two officers stormed the address and arrested twenty suspects including Ranking Dread. As well as the arrest police recovered several weapons including a machete. Small quantities of cannabis and cocaine were discovered, however, there were no firearms or crack.
Under the name of Errol Codling, Ranking Dread was allowed bail by magistrates at Highbury, north London, having been accused of possessing cocaine and cannabis with intent to supply. Three accomplices from Stoke Newington, Penge and Balham were bailed on similar charges.

A few months after the raid in east London a close friend of Ranking Dread was killed in an early morning shoot-out in Harlesden, north-west London. Rohan ‘Yardie Ron’ Barrington Barnet, took two bullets to the chest as ten rounds were discharged. Yardie Ron fired at two of his rivals, both of whom were wounded, before he was bundled into a vehicle and taken to St Charles Hospital in Notting Hill, west London, where he died.
At the scene Detectives recovered spent shells from three high-calibre firearms including a 9mm. The scene displayed all the hallmarks of a ‘Yardie’ incident, the highly public exhibition of violence failed to turn up any witnesses and police attributed the killing to a drugs feud. On 8 November 1988 a decision was made not to try Ranking Dread, 31, in Britain for drugs charges. Instead, Home Office officials decided to deport him and he was flown to Jamaica with two detectives from Scotland Yard.

Shortly after being deported from Britain Ranking Dread fled to Toronto, in July 1989, where he went on to serve a 12-month sentence for assaulting a police officer. He was again deported back to Jamaica in November 1992 after his attempts at gaining refugee status were unsuccessful, passing away in a Jamaican prison four years later.
Sites:
Wikipedia
Aliases:
Winston Brown, Winston Godling
Variations:
Viewing All | Ranking Dread
R. Dread, Rankin Dread, Ranking, Ranking Dred

June 6, 2021
I saw Ranking Dread live at the Brighton Top Rank, must've been 1984, something like that. Reggae gigs at the Top Rank in the late '70s were laid back affairs but by the '80s a more serious vibe had arrived. The place was packed and there was groups of Londoners hanging together with a slight air of menace. Probably my imagination but it was a different crowd to the soul boys/ punks / hippies / freaks and students who used to attend the reggae nights.

You could buy weed from folks in the crowd though, which you couldn't in the '70s. Only problem was; over-enthusiastic security patrolling the area and ejecting smokers.

Can't remember the exact details but a support band came on, not sure who. They played a while. Then another act came on and after that my pals and most of the crowd thought that was the end ... seeing as only two bands were advertised. I thought "hang on, that wasn't Ranking Dread". Then he came on, backed by the previous band who I think were Talisman.

Whatever the merits or otherwise of RD's lifestyle, he put on a good show, everything turned out ok in the end and the vibe didn't curdle. No one from our party was ejected, even though we were spreading hash oil liberally onto skins and smoking that. The security didn't seem to clock what was going on.

July 17, 2009
Reportedly a serious gangster wanted on both sides of the atlantic, nicknamed 'Boyak' after the sound a machine gun makes, which he is rumoured to have used.
Eventually Tappa Zukie "discovered" him and helped produce and promote him. There are conflicting reports as to what happened to him.
Second among toasters only to Tappa Zukie himself, his depth of voice makes any tune sound the heaviest. Shut Me Mouth is the track to play to people who are into like electronic music but that don't fancy reggae - the most industrial new wave and punk reggae track ever.
See 1 reply