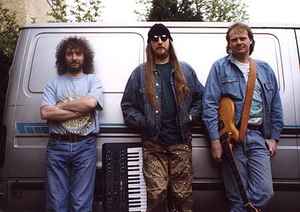 Profile:
Haze are an English progressive rock band from Sheffield, England, mainly active in England in the 1980s.

Formed in 1978 by the brothers Chris McMahon (bass, keyboards and vocals), and Paul McMahon (guitar and vocals), they played their first concert at Stephen Hill Youth Club, Sheffield on 10 November that year. They had several drummers before the longest serving and most notable, Paul 'Chis' Chisnell, joined them at a concert at the White Lion, Huddersfield, on 19 June 1983.

Following a "final" sell-out gig at Sheffield University, the trio split up on the 10th anniversary of the band's founding, 29 May 1988, but reunited for a "one-off" concert to mark the 20th anniversary, on 31 May 1998 at The Boardwalk, Sheffield. They now play together on an occasional basis, and played two 30th anniversary gigs at The Peel, Kingston-upon-Thames, London on 31 May, and at The Boardwalk on 1 June 2008, at which six new songs were performed.

Despite achieving no chart success, and never having a recording contract (they released their own albums), they attracted a considerable cult following, headlined at The Marquee, and their original albums are highly sought after collectors' items.
Members:
Chris McMahon, Paul Chisnell, Paul McMahon (3)