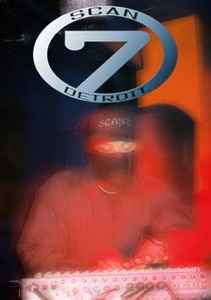 October 9, 2002
No one but The Unknown Writer himself could have termed Scan 7's mission more accurately: "to infiltrate...and knock out." (from the "Undetectable" EP, Underground Resistance)

Beginning his dance music career in tcords (Detroit). When the Separate Minds later decided to go their separate ways, Trackmaster Lou continued to make his presence felt throughout the Detroit scene and the world with a slew of releases on the labels Underground Resistance, 430 West, Direct Hit, FFRR, and Makin' Madd Records.

Steering toward techno in 1988, Trackmas the powers of Marc Kinchen, Terrence Parker, & himself as Separate Minds to record an EP for Express h is found on many other compilations besides 313 from the labels Submerge, Pow Wow, New Electronica, and Sony's "Mix Up Vol's I & II." Although each surname sometimes means a different creative angle or sound, Trackmaster Lou's signatures consistently combine intelligent, hard-hitting rhythms with ultra clean production for a groove that won't fail.