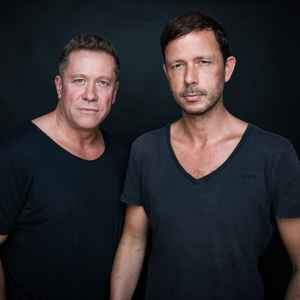 Profile:
The German Trance DJ's and Producers Claus Terhoeven (Nic Chagall) and Stefan Bossems (Bossi), met in 1997 while they had several releases with different projects for X-IT Records in Cologne. In November 1998 the duo met by chance in a studio, and decided to do a track together. The end result was a track called "The Drums" and the duo's first exploration in to Hard Trance; Cosmic Gate was born.
At this point the duo was forced to quit their resident DJ jobs to have enough time for remixes, DJ gigs and new productions.

In 2006 they released their third studio album, "Earth Mover" which was very different from previous Cosmic Gate albums as it no longer had the distinctive Hard Trance sound that they were known for. Their sound evolved even further on the fourth album, "Sign Of The Times" (2009) which took a more 'progressive' approach to Trance music, which also reflects the duo's DJ sets.
Sites:
cosmic-gate.de, cosmicgate-music.de, MySpace, Facebook, SoundCloud, Twitter, Wikipedia, YouTube
Members:
Claus Terhoeven, Stefan Bossems
Variations:
Viewing All | Cosmic Gate
Comic Gate, Cosmic Gates, Cosmic Girls

December 27, 2019
I think it’s safe to say Cosmic Gate has always been near the top of the trance pile; not just with regard to the Germans but the entire scene as a whole. Back in the early 2000s it is undeniable they were the next big “thing” with original works featured on every major compilation and remix work scattered everywhere (remixes for superstars, nonetheless… we’re talking about the likes of Tiësto, Svenson & Gielen and Talla 2XLC). Even today, the name Cosmic Gate is widely regarded. With a style which is consistent, yet enthralling, the sounds of Claus and Bossi are amongst the best in the business (and quite literally, as the Cosmic Gate music has always been heavily “manufactured” so to speak). Even following their shift away from hard trance into the progressive side of things, I can’t say the Cosmic Gate of today lost sight of true trance because they haven’t. With all due respect to fans of hard trance such as myself, the project could not afford to continue in the same direction as it did under EMI Electrola with releases in the vein of their albums Rhythm & Drums and No More Sleep as the trance scene itself began to make a hard 90 degree turn.

Be that as it may, a shift in consumer taste and move toward digital distribution is not an excuse for the abomination which Cosmic Gate became after a few years in the proggy scene. Numerous Black Hole releases from the duo I think outline their trained adaptability and carefully construed blend of their older soundset with modern direction (i.e. “Body Of Conflict,” “Analog Feel,” their remix of Armin’s “Rain”). After some time however, and further evolution in the trance scene, Claus and Bossi completely lost their touch – this is easily marked by the Wake Your Mind label era. Immersing themselves completely into the mainstage, bigroom trance wave, horrendously cheap-sounding and tasteless productions were churned out by the duo for their new label and albums. “Flying Blind,” “Fair Game,” “So Get Up,” “Going Home,” “Falling Back” … I think these are a good representation of how Cosmic Gate fell. What was once the most recognizable and brilliantly produced projects in trance crumbled to a status of being indistinguishable from the homogeneous garbage force-fed by the Armada release machine.

Today, some (but not all) of the soul Cosmic Gate lost at the turn of the last decade has been reclaimed. This process began with the release of their 2017 album series Materia. The big room influence had yet to dissipate but clear efforts were made to restore the traditional Cosmic Gate guise. More progress has been made with their most recent album - 20 Years Forward Ever Backward Never - as they are surrounding some new work with plenty of joint ventures and remixes with like-minded producers. Perhaps Claus and Bossi achieved this through a renewed vision for the future, and maybe also by bringing in the expertise of Olaf Dieckmann. The new Cosmic Gate is recreating the legendary soundscape which was lost in the middle of a turmoiled trance scene but without sacrificing their mainstream status. Most fans know the duo has tried to distance themselves from the old, EMI Electrola industrial complex which resulted in the timeless classics we regard highly today. Nevertheless, the current direction of the group fuses the aggressive construction of yesteryear with 2019’s mature sound design and progressive beats.

Looking back on the past 20 years, Cosmic Gate has somewhat made a full circle. Unable to return to the past, the group appears to be looking forward while striving to be their best today as progressive legends. Many fans of the older releases may scoff and mock, disappointed in how the roots of the project were seemingly abandoned. I understand. Yet from my perspective, Claus and Bossi have elected to use their past work and sound design to fuel their new, brilliant productions. The vision of Cosmic Gate after 20 years is fully encapsulated by their concept… Forward Ever Backward Never.
Reply Notify me 8 Helpful

January 3, 2012
Well, Stefan and Claus used to be my favourite producers. Well, they still are, but all tunes involved are from the pre-2006 era. From their very first exploits like the infamous remix of 'U96 - Das Boot' or 'Mental Atmosphere', to the very last harder Cosmic Gate tracks like their take of 'CYB - Now'. their sounds were absolutely sublime AND unique. After that however, even they, at least so it seems, succombed to the typical big shot trance bandwagon. And within no time became one of the most celebrated 'regular' trance deejays and producers.

And even if I, and with me many other hard trance maniacs, do not longer listen to their new stuff, the scene should always be grateful to the immense contribution they made to our favourite kind of music!
Reply  See 1 reply Notify me 9 Helpful

January 15, 2004
The sound of Cosmic Gate is enthralling. Hard Trance is their forte and needless to say, they make some of the hardest trance tracks around. From Exploration of Space (most likely their most illustrious track) to Fire Wire and to The Truth and the rest – all tracks are mixed excellently. Their performances live at Trance Energy are just awesome also. The sound of Cosmic Gate remains etched in my mind throughout the years.
Reply Notify me 6 Helpful