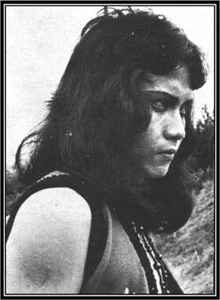 Profile:
Indonesian rock musician, one of the most important in the country.

In 1966 Benny Soebardja started his career as the guitarist/vocalist of Bandung's beat combo The Peels (4). Being tired of covering other bands (Cream, Beatles, Hendrix), he left to form Shark Move. Around 1972 he occasionally joined God Bless and GPL (Group Pecinta Lagu). When a member of Shark Move died, the group disbanded. Benny Soebardja then formed Giant Step (2) and other band called Lizard to be the backing of his solo outings. At the beginning some of both band members were similar. During Benny Soebardja's Lizard years you can hear how the English songs mattered more and more and the style went from a rockier side to a more ballad side, with use of acoustic guitars too. British poet Bob Dook guided the English lyrics, so that they got their own qualities. During the whole period Benny also distinguished himself as a good electric guitarist.
In Groups:
Fantastique Group, Giant Step (2), Shark Move, The Peels (4)
Variations:
Viewing All | Benny Soebardja
B. Soebardja, Benny, Benny Subarja