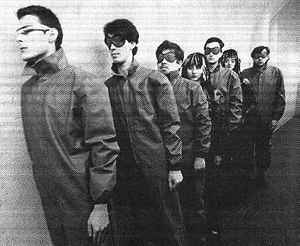 Profile:
In the late 70's, a group of friends leaded by Servando Carballar were writing fanzines in the post-dictatorial Franco regime in Madrid, Spain. They were enthusiasts of science, technology, futurism, films, board games and of the music from bands such as Cabaret Voltaire, Throbbing Gristle, Devo, Kraftwerk, Sex Pistols and many more. They decided to form a band as a better media to communicate their ideas. In 1979 "El Aviador Dro y Sus Obreros Especializados" was formed. They were pioneers of synth-pop in Spain and even invented the term tecno-pop, which they used in late 1979 to describe their music in interviews. The band has had several line-ups with their leader Biovac-N as the only remaining original member. From the first Aviador Dro lineup, a number of members split to form Esplendor Geometrico, with a more radical approach to music. Their more creative period was between 1980 and 1985. They founded label DRO to release their own provocative anthem, "Nuclear Si" ("Nuclear, yes, of course...") as single. DRO was to become the most important independent label in Spain.