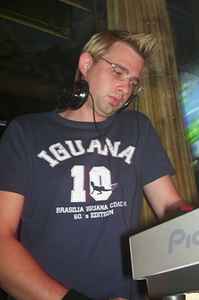 Real Name:
Jeroen Kant
Profile:
Jeroenski was already at an early age interested in music and dance music in particular. He started out playing at schoolparties and as a mobile DJ. Later on he started to play at discotheques and parties more and more.

Before the house virus caught up with him he played hip hop and breakbeats. Jeroenski nowadays plays just about anything from garage to club as long as it's funky and was made with 'love and dedication'. He has been writing music reviews and interviews for Holland's number 1 dance magazine Bassic Groove magazine for about 7 years and has been working in the music business on a professional basis for 5 years before becoming a full time DJ/producer.

Nowadays Jeroenski runs his own record label called Pitch Records on witch he releases his own track but also projects by other producers such as Roog and Greg (Hardsoul) and Alex van Alff. Together with Rob Boskamp he hosts the Clubclassics parties. This concept is also available on CD.
Sites:
djjeroenski.com, MySpace, Facebook, Twitter, SoundCloud
Aliases:
Another Dutch Guy, Jeroen Kant, The Class Of 1986
Variations:
Viewing All | DJ Jeroenski
DJ Jeroeski, DJ Jeronski, DJ Joerenski, J, Jeroemski, Jeroenski, Jeroensky, Jeronski