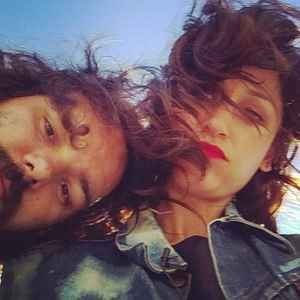 Profile:
Oh Boy Les Mecs formed in March 2012 when Tracy Marcellino and Hanford Pittman decided to create electronic music. The duo's mixture of heavy synths and evoking vocals create a distinct electronic pop sound. They played alongside Hercules, Love Affair and Rare Times as part of the Red Bull Sound Select event at The Troubadour.
Tracy and Hanford met at SXSW through the bands they were in at the time, Hanford joined the band that Tracy was in, but that band dissolved. Hanford and Tracy decided to still play together.
The name Oh Boy Les Mecs [pr. o-boi-lay-mek] came from their artist friend, Joya Martuscello, who did the artwork for their EP, Nurture Nature. Oh Boy Les Mecs means "Oh Boy You Guys". This is a French-English play on words.
Oh Boy Les Mecs have performed at several festivals and concerts throughout Los Angeles such as Jubilee and Echo Rising.
The show with Silversun Pickups was their first show. They played with the Silversun Pickups at several shows, one of which was at The Observatory. It was then that Tracy and Hanford decided that they would perform as a duo.
Light sculptor Ólafur Elíasson, whose exhibition Tracy saw in Chicago, inspired them to create light boxes on stage.
The Knife, Nine Inch Nails and Björk had a big influence on their music. Tracy was into Aphex Twin when she got into electronic music.
Their live shows sometimes featured drums and they had a resident drummer, Michael Feerick, who also played in Young Light.
Sites:
ohboylesmecs.com