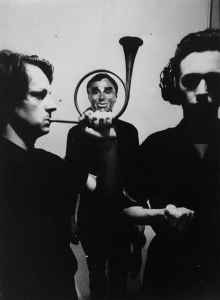 Profile:
Cabaret Voltaire were a British music group from Sheffield, England.
Initially composed of Stephen Mallinder, Richard H. Kirk and Chris Watson, the group was named after the Cabaret Voltaire, a nightclub in Zurich, Switzerland that was a centre for the early Dada movement.
Their earliest performances were dada-influenced performance art, but Cabaret Voltaire later developed into one of the most prolific and important groups to blend pop with dance music, techno, dub house and experimental electronic music.
The band formed in Sheffield in 1973 and experimented widely with sound creation and processing. These early experiments are documented on the triple album CD set "Methodology" (Mute 2002). They eventually turned to live performance. At thier first ever gig in 1975, Mallinder was hospitalised with a chipped backbone after the band had objects thrown at them. However the arrival of punk rock brought a more accepting audience for their industrial, electronic sound and they were championed by Sheffield punk fanzine Gunrubber edited by Paul Bower of local band 2.3, and Adi Newton of The Future/Clock DVA.

In 1978, Cabaret Voltaire signed to Rough Trade Records. With Rough Trade they released several acclaimed musically experimental singles and EPs, including "Extended Play", "Nag Nag Nag" and "Three Mantras", and albums such as "The Voice of America" in 1980, and "Red Mecca" in 1981.
Chris Watson left the group in late 1981, for a job in television. He went on to found The Hafler Trio with Andrew M. McKenzie before becoming a BBC sound engineer and has released many field recording works.
During this time they toured Europe, Japan and America without major record label support, releasing "Hai!", a live album recorded in Japan, in 1982.

In 1983, Cabaret Voltaire decided consciously to turn in a more commercial direction, with the album "The Crackdown" on Some Bizzare / Virgin Records. This decision was rewarded with the album reaching number 31 in the UK Albums Chart - over 60 places higher than their previous (and then only) chart placing. In 1984, the singles "Sensoria" and "James Brown" from the album Micro Phonies (also on Virgin) charted on the UK Indie Chart, as well as getting play in the underground dance scene.

In 1987, the band released "Code", followed by the house-influenced "Groovy, Laidback & Nasty" in 1990. A series of completely instrumental works under the Cabaret Voltaire name were released on Plastex/Instinct/Apollo between 1992 and 1994. The last Cabaret Voltaire release to feature Mallinder singing was on the album "Body And Soul" in 1991.
Since the mid-late 1980s, Kirk began a solo career under several names, including Electronic Eye and Sandoz, while Mallinder relocated to Perth, Australia and recorded with a collaborator under the name Sassi & Loco and, more recently, in another collaborative effort the Kuling-Bros. Mallinder also helped run his own Offworld Sounds label and contributed to synthesizer and programming on Shaun Ryder's solo album Amateur Night at the Big Top. Mallinder has since returned to the UK, and records as part of Wrangler, Creep Show and in a number of collaborations.

In 1996, Mallinder reported to Inpress magazine's Andrez Bergen that "I do think the manipulation of sound in our early days - the physical act of cutting up tapes, creating tape loops and all that - has a strong reference to Burroughs and Gysin; in terms of the Dada thing, there's a similarity between the Dadaists' reaction to the bourgeoisie and the war and our own position - we felt alienated from popular culture ourselves. I think those kinds of attitudes become embedded within you, but I'm not sure how it relates now..."
Hopes of a Cabaret Voltaire reunion were raised when Kirk dropped hints in the late 1990s, the most significant being in the notes of a reissue of Radiation, but this never happened. In a special 'Depeche Mode/History of Electro-pop' edition of Q magazine, Kirk suggested he is still considering resurrecting the Cabaret name, but this time he plans to "Get some young people involved". Kirk has used the Cabaret Voltaire name since 2009 in collaborations with Kora, The Tivoli, and in the "Johnny YesNo Redux" reissue.

In 2014, Richard H. Kirk resurrected the Cabaret Voltaire moniker live for a solo performance at the Atonal Festival in Berlin, playing brand-new material only. The overwhelming success of that show led to a string of live appearances around Europe since 2015 and a return to full activity of Cabaret Voltaire in the solo persona of Richard H. Kirk with the release of the "Shadow Of Fear" album in November 2020.

July 13, 2021
i was able to get a a full set of cabaret voltaires shadow of fear it consisted of the double purple album the cd the cassette and the t shirt did anyone else get this
Reply Notify me Helpful

March 30, 2021
Great band ...from they early beginnings to the latest works... what a trip!
Reply Notify me 1 Helpful

Mal -"We all used to be skinheads, which is how we first came to know each other..We were brought up on Soul and Reggae ..which probaby explains our preoccupation with rhythm.. you could call us an experimental Skinhead band, but I really don't like to put labels on it" from a interview in Masterbag #12, 1982.

May 24, 2017
I love all their phases, but that's a function of liking techno and synthpop, as well as experimental and industiral. Somehow they covered it all, but the one common factor is a level of complexity and funk, that evolves through a track, that was always a few steps ahead of everyone else. Its no wonder that they were hugely influential to 90s trance (especially goa trance) as well as Underworld, etc.

June 1, 2016
How do you sum up Cabaret Voltaire? Well, there's something for everyone..... Some like the early, some like the middle and some like the latter phase of this genius. Me, I love it all, I never tire of it, I'm always digging and delving, back and forth and it doesn't matter what mood I'm in, I'll always find something that'll put a smile on my face and a tear in my eye. A brilliant, insurmountable body of work :-)
Reply Notify me 8 Helpful

August 13, 2015
having been a massive fan of the cabs from a very early date i have to agree with some and not agree with others from hearing headkick in a club called eric in liverpool in 1978 i was hooked the early stuff was raw and very dark but with a crazy uplifting beat i agree with richard h kirk when he says red mecca was the album that best described the time but i also think voice of america as stunning in its concept. then came for me the two massive highlights of the early cabs yashar and three mantras both records were 15 years ahead of their time and nobody has or can better them as for the later stuff i think the last one i can say caught me was i want you and sensoria due to the fantastic beats .
going back to the early days seeing the cabs a few times i have to admit some of the gigs were helped with a chemical inducement lol
i saw them at the town and country club in the late 70s and retford porterhouse in the early 80s both gigs left me wanting more .
cabaret voltaire have lifted british music to heights it was struggling with without realising they did it .
if it wasnt for the cabs british dance music would not be what it is sampling cut ups etc .
so when people like the press start firing what did the achieve at you tell them everything that is good about music can be foumnd in a cabs record collection
Reply  See 1 reply Notify me 5 Helpful