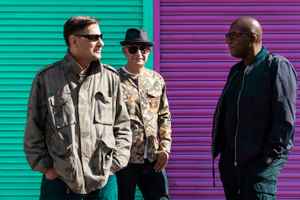 Any ACR fan who loves 81s Sextet or 82s I’d Like To See You Again , take a moment to listen to anything from Freeez’s 1980 ‘Southern Freeze’ album, particularly the track ‘Flying High’....

April 14, 2004
Now this is funk - once cold and catchy, now warm and catchy... true luxury of the beat. Sexy, oh yes... and whatever you find by them - grab it! Your legs are waiting. Highly recommended: 'Faceless' (from 'Graveyard and the Ballroom'), 'Life's a Scream', Felch (from '... to Each'), Skipscada, Knife Slits Water (from 'Sextet')... Soul Jazz Records wrote New Order might be the first to push this kind of thing to international stardom but while they were operating as Joy Division, ACR were there light years before....
See 2 replies