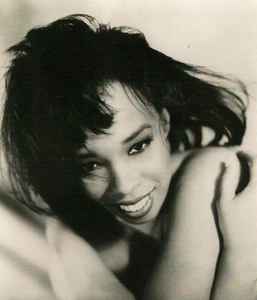 She along with Mic Murphy (The System) were members of the short lived band from New York, The Jack Sass Band (also known as Sass), in the late 1970s and early 1980s. The band was known for their songs, 'Much Too Much' and 'Save My Life'. La La went on to singing backup vocals, and songwriting during the 1980s. She has written songs for Lillo Thomas, Melba Moore, Glenn Jones, Stephanie Mills, Whitney Houston, and the late Carl Anderson, and she worked with other R&B producers such as Kashif.
La La released two albums, La La, released in 1987, and Always (La La Means I Love You) in 1991.
She is currently a professor at York College, City University of New York.
Sites:
laforrestcope.com, Facebook, linkedin.com
Aliases:
LaForrest Cope
Variations:
Viewing All | La La
"La La", L. Cope, LALA, La Forrest Cope, La La Cope, LaLa, LaLa Cope, Lala, Lala Cope, Lalá

July 11, 2010
I am sorry my mistake here. I was looking at FULL FORCE and they did NOT have LALA mentioned OR Steven Dante's why can't you sit still listed and so I was switching back and fourth on two screens. I wanted to see if either were doing anything lately. I was in 7th grade when I discovered LALA's solo work. Still sounds great today. Something about the actual drums back then sound thicker and fuller. Kinda miss that sound!
Reply Notify me Helpful

May 29, 2010
whats the name of the song featured ,in beat street ,in the burning spear audition the one next to lala;s in to the nigth
Reply  See 1 reply Notify me Helpful