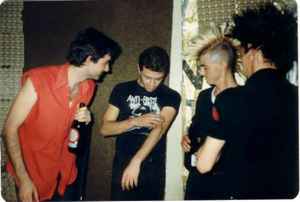 Real Name:
Mark Hayes, Robert Pillar, Tony Loader, George Klestinis, Dave Williams
Profile:
Perdition formed sometime in 1983 in Adelaide, South Australia. The original line-up started with Mark Hayes on vocals, Robert Pillar on guitar, Tony Loader on bass and George Klestinis on drums. After the release of their A Positive Alternative to Torture tape, Klenstinis left the band to make way for drummer Dave Williams of Debortion. After a trip to Melbourne and a radio interview on 3PBS, the band managed to impress quite a number of people, thus landing them a spot on the Dead Kennedys show in September of '83 in Adelaide.

In August of 1984, Perdition released The Intoxicated EP on Phil Macdougall's Reactor Records (3) label. 500 copies were pressed of the five track 7". Later in December of '85, Macdougall would re-release the record as a five track 12" to improve the mix. While the band enjoyed popularity and tours in the east of Australia, they struggled to play in their own city of Adelaide. In June of 1985, the How to Teach Your Budgie to Talk 12 track 12" was released, again on Reactor Records (3). 1000 copies of the record were pressed, unfortunately, it was one of the label's poorest selling records, as the band had moved in a less "hardcore" direction. 1985 also saw the release of a split LP with Melbourne band Vicious Circle (7) on Flipside (US) records from America.

Although they headed in a much poppier direction towards the end, Perdition were at the forefront of the Australian Punk/Hardcore scene along with the likes of Depression (2), Civil Dissident and Vicious Circle (7).
Sites:
homepages.nyu.edu
Members:
Ben Parkinson (2), Dave Williams (10), George Klestines, Mark Hayes (2), Robert Pillar, Tony Loader
Variations:
Viewing All | Perdition (3)
Perdition