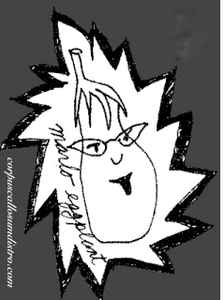 Profile:
Marlo Eggplant is a prominent figure in a thriving and diverse international scene of female experimental music performers. As curator of the pioneering Ladyz in Noyz compilation series, an ongoing project from 2008 to the present, she has helped to foster this scene and continues to promote emerging artists from around the world on her record label Corpus Callosum. With an intuitive command of minimal instrumentation, including processed autoharp and contact microphones, Marlo Eggplant's sparsely structured notes and layered static textures build into sonically dense drone improvisations.

Receiving childhood classical training in voice, guitar, piano, and cello, Marlo began her solo musical career in the 1990s favoring folk and punk, playing local coffee shops and arty hangouts as a teen. When she attended college in the Berkshires, she became more interested in avant garde and bizarre musics. A burst of raw creativity in the early 2000s brought the playful lo-fi pop experiments of the first recordings released under the name Marlo Eggplant, concurrent with her disjointed trance-like drumming as half of the deconstructionist rock duo Hazardous Guadalupe, and her co-founding of the Spleencoffin record label with Timothy Wisniewski in 2003.