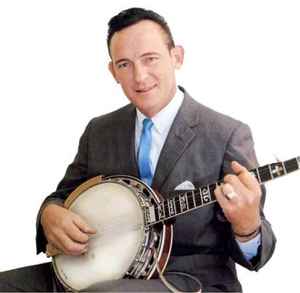 Real Name:
Donald Wesley Reno
Profile:
Don Reno, father of Don Wayne Reno, was a bluegrass and country musician best known as a banjo player in partnership with Red Smiley and later Bill Harrell. He was born February 21, 1927 in Spartanburg, South Carolina and died October 16, 1984 in Lynchburg, Virginia. Played the guitar at a professional level by the time he was eight and the banjo by the time he was twelve. He performed with the Morris Brothers, Arthur Smith, and Bill Monroe, but really began to be noticed when he and Red Smiley came to Cincinnati in 1951 as members of Tommy Magness and his Tennessee Buddies, which cut four songs on King Records’ subsidiary Federal Records. After that band broke up, he and Red came back to King in 1952 and cut sixteen sides, including Don’s bluegrass standard “I’m Using My Bible For a Road Map.” This was the beginning of a long association with King Records. An exceptionally versatile musician, Don recorded “Home Sweet Home” and “Green Mountain Hop” for King by dubbing three vocal parts, guitar, banjo, fiddle, bass, and snare drum himself. His tenor singing was unmistakable, and his fresh and original songwriting was both excellent and extensive. He wrote a high percentage of the songs recorded by Reno and Smiley and co-composed and recorded “Feuding Banjos” with Arthur “Guitar Boogie” Smith, in whose Charlotte-based band he performed before the Tennessee Cut-Ups became a full-time organization in the mid 1950s. Along with partner Red Smiley, Don Reno was elected to the IBMA Bluegrass Hall of Fame in 1992. After his and Smiley’s first split in 1964, he teamed with Benny Martin briefly, Bill Harrell until 1979, and with sons Dale and Don Wayne until his death, recording for Dot, Mercury, King, King Bluegrass, CMH and several other labels.
Sites:
bluegrassbanjo.org, Wikipedia, doodah.net, cindaybluegrass.wikidot.com
Members:
George Shuffler
In Groups:
Bill Monroe & His Blue Grass Boys, Chick And His Hot Rods, Reno & Harrell, Reno & Smiley And The Gang, Reno And Smiley
Variations:
Viewing All | Don Reno
C. Reno, D. Reno, D. Reno,, Don, Don Reno, R. Stanley, Reno, Smiley