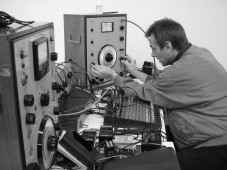 Real Name:
Zbigniew Karkowski
Profile:
Zbigniew Karkowski was born March 14, 1958 in Krakow, Poland; he passed away December 12, 2013 in Peru. He studied composition at the State College of Music in Gothenburg, Sweden, aesthetics of modern music at the University of Gothenburg's Department of Musicology, and computer music at the Chalmers University of Technology. After completing his studies in Sweden, he studied sonology for a year at the Royal Conservatory of Music in Den Haag, Netherlands. During his education, he also attended many summer composition master courses arranged by Centre Acanthes in Avignon and Aix-en-Provence, France, studying with Iannis Xenakis, Olivier Messiaen, Pierre Boulez, and Georges Aperghis, among others. He worked actively as a composer of both acoustic and electroacoustic music. He has written pieces for large orchestra (commissioned and performed by the Gothenburg Symphony Orchestra), plus an opera and several chamber music pieces that were performed by professional ensembles in Sweden, Poland, and Germany. He was a founding member of the electroacoustic music performance trio "Sensorband." Zbigniew had lived and worked in Tokyo, Japan for the past eight years, and was active in the underground noise scene there.
Sites:
Wikipedia, disquiet.com, Bandcamp
In Groups:
Cosmic Trigger (2), Le Dépeupleur, MAZK, Mental Hackers, P.I.T.T., Pop (Product Of Power), Sensorband, Senssurround Orchestra, Texas Instruments (2), UBSB
Variations:
Viewing All | Zbigniew Karkowski
K. Karkowski, Karkowski, Sbigniew Karkowski, Z Karkowski, Z. Karkowski, ZK, Zbiegniew Karkowski, Zbigniev Karkowski, 寺·卡高斯基

May 5, 2016
Does anyone know where to find his scores or a list of the pieces he composed for accoustic musicians?
Reply Notify me 1 Helpful