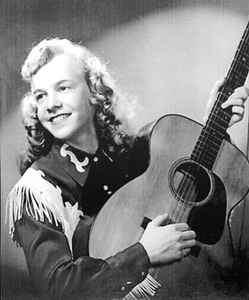 Real Name:
Janis Darlene Martin
Profile:
Born: 27th May 1940 Sutherlin, Virginia, USA
Died: 3rd September 2007
Janis Martin was an American Rockabilly and Country Music singer. Martin was one of the few female Rock & Roll artists to be making records, proving to the male-dominated Rock & Roll industry that women too could sell a large amount of records and score Rock & Roll hits. This opened doors for other Rock & Roll singers to come, like Brenda Lee.

She was nicknamed The Female Elvis, for her impressive dance moves she did on stage, similar to that of Elvis Presley.

In 1953 at the tender age of 13 Janis Martin was developing her own proto-rockabilly style on WRVA's Old Dominion Barn Dance, which broadcast out of Richmond, VA. Although Martin performed mostly "country" songs for the show, she also did songs by Rhythm and blues singers Ruth Brown and LaVern Baker, as well as a few Dinah Washington songs.

At age 15, Martin was signed with RCA only two months after Elvis Presley signed with the label. In 1956, Martin released her debut record under RCA, "Will You Willyum," backed by her own composition, "Drugstore Rock'n Roll." The song became the biggest hit of her career, selling 750,000 records and hitting the country and pop charts. Soon Martin was performing on American Bandstand, The Today Show and the Tonight Show. She also appeared on Jubilee USA, and the Grand Ole Opry in Nashville, Tennessee, becoming one of the younger performers to ever appear. Billboard named her Most Promising Female Vocalist that year.

Presley and RCA were so impressed with her stage presence, they dubbed her the Female Elvis. She was chosen by RCA to tour as a member of the Jim Reeves show and continued recording rock and roll and country material that ended up being successful on both charts, including "My Boy Elvis," "Let's Elope Baby," her cover of Roy Orbison's song "Oooby Dooby" and "Love Me to Pieces."

Martin had secretly married her boyfriend in 1956, and became pregnant while visiting him while he was stationed overseas with the military. Her teenage pregnancy caused RCA to drop her in 1958. Although King Records and Decca Records were interested, she signed with a Belgian label in 1960 called Palette. By 1960, Martin was on her second marriage, and her husband demanded she leave the music business.

In the 1970s, she began performing again with her newly-formed band, The Variations. In 1975, she was working for the Danville Virginia Police Department when Edd Bayes coaxed her to appear locally and tell her story in Goldmine magazine. Martin toured through Europe as part of he rockabilly revival there, and in 1979 Bayes convinced RCA to release four Martin songs in their vault. They were released on Dog Gone Records.

In the 1980s, the Bear Family label gathered Martin's complete record history with the compilation album The Female Elvis.