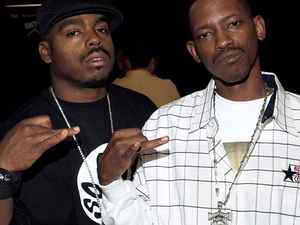 Profile:
Tha Dogg Pound is an American hip hop duo formed in 1992, made up of West Coast rappers Kurupt and Daz Dillinger (formerly Dat Nigga Daz). They were signed to Death Row Records in their early careers and were key to the label's success. The duo made their first appearance on Dr. Dre's highly acclaimed debut album The Chronic (1992), appearing on several songs. They also appeared on Snoop Dogg's debut album Doggystyle (1993), and the Death Row soundtracks Murder Was the Case and Above the Rim. Their debut album Dogg Food was released in 1995. It was another addition to the controversy of hardcore hip hop due to the sexual and violent lyrics and went on to sell two million albums.

Kurupt and Daz went on to release solo albums starting in 1998. They both eventually left the crumbling Death Row Records in 1999. Daz left due to long-lasting internal struggles on the label after friend and labelmate Tupac Shakur's murder in 1996. Kurupt started Antra Records, while Daz and Soopafly started D.P.G. Recordz. In 2002 a feud arose between the two when Kurupt decided to sign back with Death Row Records, upsetting everyone involved with the group. His awaited Death Row release Against Tha Grain had been postponed several times while Kurupt was on the label, later being released in August 2005, after he was off. In January 2005, Daz made another solo album release titled Tha Dogg Pound Gangsta LP. Tha Dogg Pound then got back together as a group and released Dillinger & Young Gotti II in November 2005. In 2006 Snoop Dogg decided to get involved and the three released their official reunion album Cali Iz Active.