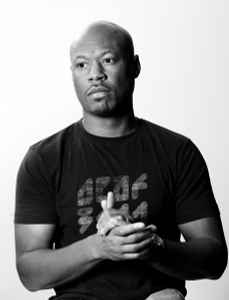 Real Name:
Robert Artis Hood
Profile:
Robert Hood makes minimal Detroit techno with an emphasis on soul and experimentation over flash and popularity. Having recorded for Metroplex, as well as the Austrian Cheap label and Jeff Mills' Axis label. Hood started Hardwax in 1991 (Robert Hood's first label prior to forming M-Plant) and also owns and operates the M-Plant imprint (including the two sublabels Drama and Duet) through which he has released the bulk of his solo material. Hood was a founding member, along with Jeff Mills and Mike Banks, of the Underground Resistance label, whose influential releases throughout the early and mid '90s helped change the face of modern Detroit techno and sparked a creative renaissance. Infusing elements of acid and industrial into a potent blend of Chicago house and Detroit techno, UR's aesthetic project and militant business philosophy were (and remain) singular commitments in underground techno. Hood left Detroit (and UR) with Jeff Mills in 1992, setting up shop in New York and recording a series of 12" EPs. Through the mid '90s, Hood has focused on his solo work, setting up M-Plant in 1994 and releasing singles such as "Internal Empire", "Music Data" and "Moveable Parts". Although his desire to remain underground has been replaced by an urge to reach a wider audience, Hood remains fiercely critical of artistic and economic movements destructive to inner-city communities and has combined his musical enterprises with outreach and social activist ends. His debut Peacefrog album "Point Blank" took Hood's hypnotic minimalism to entirely new depths and territories, whilst his latest album "Wire To Wire" takes his productions onto new levels of musicality and sophistication within the world of electronic music.
Sites:
MySpace, Wikipedia, Facebook
Aliases:
Dr. Kevorkian, Hood Scientific, Inner Sanctum, Monobox, Rob Noise, The Mathematic Assassins, The Vision
In Groups:
Floorplan, H&M, Missing Channel, Underground Resistance, X-101, X-102, X-103
Variations:
Viewing All | Robert Hood
Hood, R. Hood, Rob Hood, Rob Noise, Robert "Noise" Hood, Robert Artis Hood, Robert Hood's

As a human being i am absolutely allergic to any religious doctrines and therefore cannot stand people falling into these traps, preaching stuff that holds us in the 5th century as a species....with 2 exceptions though - Ayrton Senna and Robert Hood, without whom I cannot image becoming myself.

The man's output draws a line dividing "mainimalism" from (meaningless) "simplicity", which sometimes could be confused, until you try to imitate any of RH's releases ;)

nice to see the complimentary comments below. I'll only add a brief one. went to experience a decks & 909 set he did at Lost (London), late '99 or earl 2K's. apart from dancing, I went upstairs to watch him work the floor. very smooth & tight, almost understated. pure techno. but an even cooler thing I clocked was his wife leaning against a table to the side of the stage, dressed elegantly, smiling proudly & grooving gently. dead cool. pure class. both of them. full respect

January 27, 2018
In my opinion one of the absolute masters of Detroit techno and a man that doesn't get mentioned enough. His entire catalog is filled with classic, timeless material and he's continued to remain consistent into current times as well.
Reply Notify me 3 Helpful

from the horses mouth
http://jekyllethyde.fr/2009/12/robert-hood-interview-video/
He says its God's work. I believe him.

January 25, 2013
Sometimes I think this man is not human. Like Tesla, where he is too advanced for the simple human kind in the present day. maybe time travel? Maybe robotics? We might never know just enjoy I guess
Reply Notify me 14 Helpful

October 30, 2007
I met Robert Hood only once when he played at Analog City in a warehouse/club behind Kings Cross in London in the mid 1990's. I remember even now, over a decade later, that we had a conversation after he finished his set about how his parents had influenced his interest in, and aproach to, music and life.

What a bloke, I thought, to have such talent and yet remain effortlessly genuine and unpretentious. At the risk of making a complete fool of myself I commented, as we parted company, that if he was ever in want of name for a track, as his series of untitled moveable parts releases on m-plant seemed to suggest, he might consider using "Wandering Aimlessly" which just about summed up the state of my life at the time. We shook hands and off he went into the night.

A few monts later, back in Newcastle, after buying on sight the new m-plant release [MP 306] I opened it at home I saw track B was titled "Wandering Endlesly". Maybe against the background of the club soundsystem he had misheard me, perhaps he refined and improved my suggestion, or maybe it was just mere coincidence. I don't suppose I will ever know. What matters is that the man left a lasting positive impression on me. Articulate, intelligent, principled and creative. The master builder. A supremely gifted artist and a gentleman.

I still listen to his records at home and appreciate the remarkably precise attention to detail and production standards, with compositions ranging from raw minimalist material to others that infuse warmth and emotion, but overall what stands out is the consistent quality of his work; no flat spots or low points. It would be fickle to pick out a few representative tracks. Just listen to what you can and decide for yourself.

There are a few artists that I get completist with, but not many with a catalogue as large as Robert Hood's. This man practically defines perfection within techno. His super-minimal approach is much imitated but rarely equalled. There's nobody else who remains so minimal yet so hard and powerful in their production.

One of the proudest and fiercest exponents of Detroit techno, his DJ sets are a beauty to behold; Playing only on Technics decks that have been modified to allow for up to +16% pitch control, he takes his own productions and those of similar artists to another level altogether, averaging 150bpm in an era when many non-hardcore techno DJs are slowing back down to house music tempos. Fast - yes. Hard - yes...yet the tight, clean production in the records he plays (which admittedly are largely his own) prevent it from becoming just another harsh, banging, noisy techno experience, and one finds oneself compelled to dance in a manner as unrelenting as the music he plays. Hold onto your mind, as the super-abstract analogue grooves tear strips off you.

Occasionally, he plays in a "semi-live" manner, using drum machines and analogue synths to add to the records he plays - making the performance truly unique. Those lucky enough to have heard him doing this will never forget it...mind blowing.

While he does occasionally take the odd jaunt into downbeat jazzy grooves, his more familiar productions are often hard to understand on first, second, or any number of listens, until you hear them in the context they are designed for - on a LOUD and CLEAR sound system!!! At that point, it's just best to give in and let the music take over.