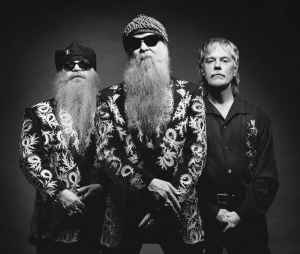 Profile:
ZZ Top is an American rock band formed in 1969 in Houston, Texas. The band consists of guitarist and lead vocalist Billy Gibbons, bassist and co-lead vocalist Dusty Hill, and drummer Frank Beard. The band and its members went through several reconfigurations throughout 1969, achieving their current form when Hill replaced bassist Billy Etheridge in February 1970, shortly before the band was signed to London Records. Etheridge's departure issued primarily from his unwillingness to be bound by a recording contract.

Since the release of the band's debut album in January 1971, ZZ Top has become known for its strong blues roots and humorous lyrical motifs, relying heavily on double entendres and innuendo. ZZ Top's musical style has changed over the years, beginning with blues-inspired rock on their early albums, then incorporating New Wave, punk rock and dance-rock, with heavy use of synthesizers.

June 30, 2022
I can’t vouch for these guys as I don’t know any of them personally. I do know some of the songs. Such as Tush
Reply Notify me Helpful

May 15, 2019
To me ZZ Top started loosing it around El Loco. But really lost it with Eliminator. I don’t really care for that synth sound. It ruined their music in my opinion.
Reply  See 5 replies Notify me 2 Helpful

February 10, 2018
What is this version of Eliminator where there are handles on top of the record and the physical release is made to look like a handbag? It's a promo release I saw in a record fair but didn't manage to buy
Reply  See 1 reply Notify me Helpful

be very careful of "new" versions of the first album...it was "remixed" some time in the 90s and was butchered to all hell...the drums went from tight and clean into a reverby mess. Some morons idea of an improvement no doubt. Stick to the original version/pressings

July 2, 2017
Kinda wish all of their albums sounded like Afterburner. The mix of blues rock and synthesized dance music was brilliant in my opinion. But they were always a blues rock band at heart and that always shone through in everything.
Really wish there was a compilation of their 12" mixes though as the extended mixes of Sleeping Bag and Stages are notoriously difficult to find on CD...
Reply Notify me 5 Helpful

December 23, 2016
...Ironically the only one without a beard is the drummer called Frank Beard!! Billy Gibbons once said he turned down a million dollars from Gillette to shave off his beard!!

In the more than thirty years that they have been together, ZZ Top have mutated from a hard rocking boogie band into pop culture icons. Some might say, that they are also forward thinking musical geniuses whose appropriation of MTV and melding of Hard Rock to Dance rhythms put them so far ahead of the curve that -- for a while in the mid-1980s -- they seemed poised to take over the world. The band started out in 1970 when singer-guitarist Billy Gibbons got together with drummer Frank Beard and bassist Dusty Hill. Gibbons, only in his early twenties, was already a veteran musician whose previous band The Moving Sidewalks had had regional hit records and had opened for Jimi Hendrix. The band started out playing hard edged, deeply blues based Boogie Rock that cruised on the power of the Hill-Beard rhythm section and Gibbons' powerful vocals and even more powerful guitar. The band toured relentlessly, guided by svengali-like manager Bill Ham, a disciple of Elvis' Colonel Tom Parker. He helped them score a major record deal and created a certain band mythos (access to the band was severly limited; personal biographical information was closely guarded) that lingers to this day. Their third album, Tres Hombres broke things wide open with the smash hit "La Grange," a...
... song driven by an insistent John Lee Hooker boogie riff and Gibbons' squealing guitar solos. They became increasingly popular on the live circuit, breaking attendance records set by The Beatles by 1976. Returning after a three year hiatus in 1979, they emerged with their now-trademark hirsute look and the hard-hitting record Deguello, which included the hit "Cheap Sunglasses." Gibbons' longtime fascination with all sorts of Dance music came into play with Eliminator (1981), which coincided with the rise of the music video as a promotional tool and took the band to new commercial heights. That record was propelled by a sound that wedded Texas Blues guitar heroics to banks of churning synthesizers and sequenced rhythms. It was the sound of money being minted as the singles "Sharp Dressed Man," "Gimme All Your Lovin'," and "Legs" shot up the charts. That the accompanying music videos included hot rod cars, leggy models, and the band doing oddly choreographed dance moves that rendered them at once hip and cartoonishly funny probably helped their album sales. Eliminator and its follow-up Afterburner sold gazillions of records and the band was, for a time, as popular as a band can be. In the 1990s the group's popularity waned some, and they moved away from the sequencers and synthesizers. They went back in the direction of their earlier work. They nonetheless continue to make vital music that draws deeply from the blues and R&B tradition, while always trying to bring something new to it.
Reply  See 1 reply Notify me 3 Helpful

July 25, 2014
Why are all these records in the album section ? They belong to the miscellaneous releases and not to the albums.... Jim Ladd hosts ZZ Top, King Biscuit Flower Hour, In the Studio, ZZ Top's Worldwide Texas Tour and so on....
Reply  See 2 replies Notify me 1 Helpful

July 3, 2012
ZZ Top were influential to the industrial rock sound that was championed by Al Jourgensen / Ministry. The combination of rock guitars, dance synthesizers and driving beats, from their eighties material in particular, was really innovative for its time.
I'll never forget watching the video and listening to "Legs" as a child. Unfortunately, the commercial success sort of tarnished the talent and creativity of the song. It really is a badass tune.
Reply Notify me 3 Helpful