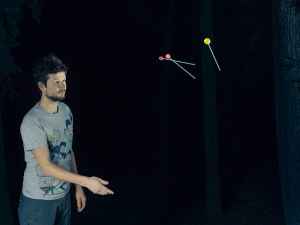 Real Name:
Tomáš Dvořák
Profile:
Tomáš Dvořák (*78) aka Floex- clarinetist, composer, producer and multimedia artist from Prague (Czech Republic). His music is characteristic by unique exploration of electro-acoustic nexus and emphasis on audiovisual aspects of art. From childhood he has been learning clarinet which later becomes the key instrument for his music - not only as “instrumental signature” but also as way of his compositional approach.

Floex started to compose electronic music in 1996. His debut album Pocustone (2001) bridges relatively isolated genres such as nu-jazz, electronic and modern contemporary music. The album was highly critically acclaimed not only in the Czech Republic and gained several awards (Angel Award 2001 and Nomination to Europian Qwartz Awards).

He is well known for his cooperation with Amanita Design on the soundtracks for the games Samorost 2 (2006) and Machinarium (2009). Machinarium OST gained massive reaction by both fans and critics and was selected as the best 2009 soundtrack according world’s number game magazine - PC Gamer.

Ten years after the debut in 2011 Floex releases new album Zorya. Probably most profound album up to date is going further in exploration of acoustic music (especially classical minimalism), soundtrack music and contemporary electronic. Album which takes as symbol Slavic night guard goddess “Zorya Polunochnaya” explores more deep, subconscious and nightly moods of music. However don’t be mistaken, this may be Floex most energetic album up to date - very adventurous, almost storytelling. Zorya received two Angel Awards (Cezch sort of Grammy Awards) in Electronic music and Alternative music category and also has been nominated to Apollo and Vinilla Awards.

Tomáš is also author of several unique interactive multimedia installations and performances (RGB, Crossroad, Live Score) which he created mainly in 2002-2007 while studying at Prague Academy of Visual arts. His recent work Archifon I and Archifon II is based on idea of making big interactive instruments from the buildings interiors via mapping (www.archifon.org). It was made together with Daniel Gregor and gained international succes being featured in BBC World, Forbes, Wire , Discovery Channel and more.