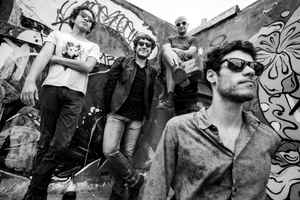 Liquidarlo Celuloide is an Psychedelic noise rock band of Lima, Perú. Since its start in 2003, it has become in an important and representative referent of today’s Peruvian musical scene. It began as a private project of home recordings of noise collages and improvisations, but now it has evolved to a industrial rock group that mixes psychedelic, noise and drone music.
In its early stages, Liquidarlo Celuloide was a personal project of Juan Diego Capurro, who edited a first album, “Fiebre de lo misterioso” (“Fever of the Mysterious”) in 2003. The sound of its music, a mix of disturbing and hypnotic Low Fi noises, was intended to be the incidental music of non-existent horror movies. Later that year, he recorded “Pradera Tóxica” (“Toxic Prairies”), which attracted the attention of the independent press in Lima.
The band was formed then, with the intention of take the music to the concert scene. Capurro recruited guitar-player Valentín Yoshimoto (a member of the band “Rayobac”) and drummer Christan Marlow. They participated in three concerts and recorded a third album, “No más video” (“No More Video”), for Buh Records in 2005. This album ends with one of the band’s more important songs of the period, “Alucinación de un leñador sin su mano izquierda” (“Allucinations of a Logger Who has Lost his Left Hand”).
By the end of 2005, the band was rearranged: Yoshimoto stayed as guitarist, and Alfonso Vargas became the new drum-player. At this point, Liquidarlo Celuloide’s music took a turn to a more rock-sounding style.
The band participated in many concerts during 2007, and in the Sinestesia Festival reached a breaking-point with an hour-long improvisation of music. In 2008, Teté Leguía was included as bass-player. That same year, Capurro, Vargas and Leguía recorded “Funktra”, aEP performed live in La casa Ida, and in 2009, a new album with the four members, “Espectro piel de reptil” (“Reptile-Skin Spectre”), was released by Kaos ex Machina records.
Valentín Yoshimoto left the band due to tendinitis, and in 2010, the new formation included Vargas in the drums and Javier Manrique in the guitar. Three more albums appeared then: a Split with Animal Machine, the EP “Escila”, and what would become its more important works to date: Buh Records’ “Cruzyficción Monosódica” (2010) and “Sinapsis” (2011). Efrén Castillo Posadas, as second guitarist, and Giancarlo Rebagliatti in the bass joined the band in 2011.
Sites:
liquidarloceluloide.blogspot.com, Facebook, Bandcamp
Aliases:
Efrén Castillo Posadas, Giancarlo Rebagliatti, Juan Diego Capurro
Members:
Alfonso Vargas, Juan Diego Capurro