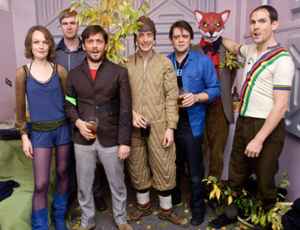 Profile:
Hailing from Cumbria in the northwest UK, brothers Yan and Hamilton, and their schoolfriend Wood relocated to Reading and formed a band, augmented by guitarist Noble whom Yan met whilst studying at Reading University.
Initially named British Air Powers, they recorded a 4-track demo before moving to Brighton. Here they renamed themselves British Sea Power after one of their demo tracks. This track was reworked and renamed 'Carrion' which became their first UK Top 40 single in 2003. That year saw the release of their debut album 'The Decline of British Sea Power' on the Rough Trade label.
Their sophomore effort 'Open Season' was released in 2005 and spawned their first UK Top 20 single 'It Ended on an Oily Stage'. Three years later, in 2008, their third effort 'Do You Like Rock Music?' earned the band a coveted Mercury Music Prize nomination. The band, now a six-piece, released fourth album 'Valhall Dancehall' in early 2011.
On August 9th, 2021 the band officially changed their name to "Sea Power", dropping the "British" from their moniker.

Rejected from the ***Women Wearing Boots*** list 👢👢 by sauvageon27
seen live (as still adding old concerts) by trcd
Artists I Have Seen Live by ZenVinyl
“The Best Music You’ve Never Heard” by crimsonmetal74
Artists I Have Seen Live by roddyrodd
Bands I've seen live. by Eviltoastman
Seen Live by LaurelCanyonVinyl
Band & Artists I have paid to see live (Headliners not festivals) by keithjudge
My Live Artists by zbw
Favourite Artists by deemur
Spex 2005 by indy133
My Collection by Klimson
Bands by UmJammerGabby
View More Lists →