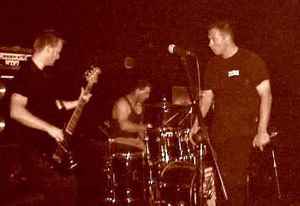 Profile:
Hailing from Adelaide, on the south coast of Australia, Where's the Pope? formed sometime in 1985. The band, comprised of Jeff-guitar, Frank-vocals, Phil-drums, Rob-bass, started playing shows in Adelaide in late '85.

Sound-wise the band was a bit of a departure from the usually UK influenced (Discharge, English Dogs, Disorder (3)) punk/hardcore scene of Australia. WTP? took their cue from the "skatecore" bands of America (J.F.A., The Faction (2)) and the more melodic American hardcore bands like 7 Seconds.

In 1987 Phil MacDougall approached the band about perhaps releasing some of the band's material. The band agreed and the Straight Edge Holocaust 9 track 12" came out sometime that year. The release, which became the last on the prolific Australian Reactor Records (3), sold well throughout Australia, so well in fact that the record almost made the commercial charts in Adelaide. Songs like "Jesus Gets Rich" and "There Goes the Neighbourhood' were sarcastic and satirical attacks on Christianity and Racism within Australian society, while songs like "Pizza To Go" showed the bands more light-hearted side.

After a significant hiatus, the band released there first "full length" LP (Straight Edge Holocaust being a "mini-LP"), entitled Sunday Afternoon Barbecues on Adelaide label Greasy Pop Records. Released in 1990, the twelve track LP was different from the first record. Lyrically the record was devoted almost entirely to beer, while musically the band seemed to have shed its loose, hardcore edge, quite possibly due to the long time between records and significant line-up changes.