The Dukes Of Hamburg 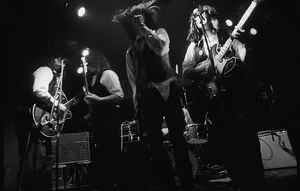 Profile:
There are two Dukes Of Hamburg, just to let you know, and both are a mix up from each other. The Dukes from Bielefeld, Germany and The Duckes from San Francisco, USA.
The story so far: In the early 90's Thilo Pieper went to San Francisco and formed with musicians of The Mummies, The Astronauts, The Phantom Surfers and on Bass Shannon Smith (Son of The Terminator Kirkwood Smith) The Americain Dukes and toured up and down the Westcost plus two successful UE tours, then moved back to germany and continued The Dukes in Bielefeld while The American Dukes still running and doing shows.
They are really inspired by The Lords, The Rainbows, Casey Jones & The Governors and Many of the oldtimer German's Beat formations as The Petards, The Monks etc, They are Germanys No1 Beat group at the very moment.