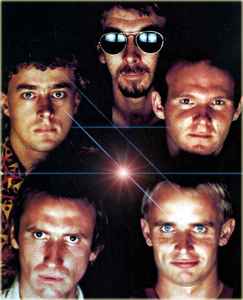 Profile:
Men at Work are an Australian pop rock band founded in 1978 which achieved international success in the 1980s. They are the only Australian artists to reach the Number 1 position in album and singles charts in both the United States and the United Kingdom with Business as Usual and "Down Under". The group won the 1983 Grammy Award for Best New Artist and sold over 30 million albums worldwide. In 2019, Colin Hay reformed Men at Work, being the bands first tour since 2002, with brief reunions in 2009.

Artists I wanna check out by Plasnes
Wantlist by Sackbutter
Collections mp3 DVD by deepinsoul
Mis Grupos Favoritos by elfinaldelmar
artists by cwmcd
Top 10 - 80s Bands That Evaporated By The 90s by spinmarket
I SAW THEM LIVE! by Star63
Bands I have seen Live by 2112adrian
80's Mega Collection by eeeben
Men at work off the record by colinhay1
my favorite bands by giovanni64
My Collection by Klimson
View More Lists →