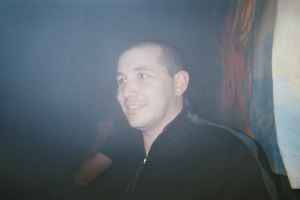 Real Name:
Ian Hicks
Profile:
Hixxy (born August 1975) is from Portsmouth, UK and his DJ roots can be found with an obsession for US Hip Hop and Rap and watching DMC Championship Videos.

Getting into rave music in the 1990s, he became resident DJ for Overload (promoted by Supreme on the Isle Of Wight, under the name DJ Hix (he later added an extra "X" so his DJ name looked bigger on flyers). Whilst DJing here he met lots of the top DJs of the period, including his DJ hero, Carl Cox. He also struck up a friendship with Dougal and began pestering him about setting up a label. He also started hanging around the Fusion record shop in Portsmouth, constantly asking if he could use the studio upstairs which was manned by Sunset Regime. He eventually got into the studio and released his first track, People's Party. Ramos also advised him to add an extra "Y" to his DJ name, as Hixxy was what everyone called him anyway.

1995 saw his friendship with Dougal lead to the Essential Platinum label being born. His track, Toytown was one of the biggest hardcore tunes of the period and led to him meeting with React about licensing it. Whilst in their offices the conversation turned to putting together a compilation, and the legendary Bonkers series was born.

After this period, he began working in Stu. J.'s Movement record shop in Southampton, as well as helping him promote his Adrenalin raves. He also hosted the happy hardcore show on Kiss FM.

With the hardcore scene in decline in the late 90s, Hixxy thought about leaving the scene, and experimented with slower, trancier sounds. When hardcore recovered and set up the Raver Baby label and parties. He also co-founded the rave organisation/label HTID (Hardcore Til I Die) with Mark Lambert. He went on to promote the Uproar events as well.

February 24, 2022
I miss the old Happy Hardcore sound of Hixxy & Vinylgroover I moved to Scotland and the 90s sound is popular in Glasgow
but the UK Hardcore stuff does sound so out dated and its not aged well

February 11, 2021
I try and keep positive when it comes to dance music in general, but the likes of Hixxy and Dougal really killed rave for me. We went from rapid break-beats, deep rolling subs, thundering synths and the occasional patois toasts or diva lick, to this cheesy, 4 to the floor crap. They really did dance music no justice, everything was cool until they appeared, from the funk and groove of Acid House to the bright stabs and chundering pianos of hardcore to the mashed up amens and roaring basslines of jungle, to then this wank, white glove bollocks. Just disappointing.
See 1 reply

December 25, 2020
looking for hixxy vs lucy westhead - dont let me know. was on clubland hardcore xtreme 9 want to download unmixed if anyone knows a good source please
See 1 reply

July 19, 2017
im trying to find a tune called 14th Dream was it by hixxy or omg as i have it on get smashed cd but i would love to get it on vinyl

July 12, 2017
Did Force and Styles - Funfair Exclusive Mix (by Hixxy) ever get released on vinyl or unmixed ? It's the best mix by far but only on mixed United Dances / Bonkers etc
See 1 reply

January 30, 2013
I'm trying to get hixxys thumper on 12" but not sure it was ever released as a 12" single, I have seen it on vinyl once, it was a 1996 pulsar records compilation with 5 other trax but unfortunately I can't find it on discogs, if anyone knows of a copy anywhere please let me know, thanks
See 4 replies

February 25, 2009
Hixxy also remixed the legendary Force Mass Motion track Panic in 1995, but unfortunately it was never released to everyones disappointment! On the flip to said Dub was Hixxys other massive track - Thumper.

The 1995 remix kept a lot of the original 1993 version, but with a more techno feel (in the same vain as Toytown), but the most noticable difference is the 'slow-down' and 'speed-up' half way through the track.

Occasionally a Dubplate will appear on E-bay for outstanding sums of money, which by all accounts, knowing how Dubplates wear, could be considered a risk.