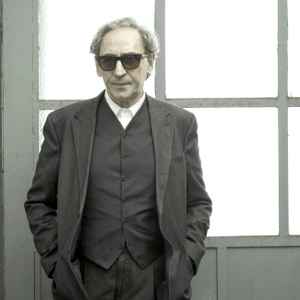 An internationally known artist, Franco Battiato has been everything in his long career, from beat singer to avantgarde performer, producer, contemporary music composer.

His beginnings lay in the mid 60's, with many singles released with no particular success, the first two under his real name of Francesco. He had left the native Sicily moving to Milan around 1965.

In 1970 after his collaboration with Osage Tribe (that he quit before their only album Arrowhead) he had a record deal with Bla Bla, releasing his first solo album in 1972. "Fetus", housed in a outrageous cover (reproducing a foetus) was definitely a prog album, but a very original one, with a minimalist sound mainly based on the use of a VCS3 synth, unusual lyrics, complex arrangements. Two tracks, "Energia" and "Una Cellula" were also released as single.

Second album "Pollution" followed the same route, but the sound was a bit richer with a larger use of traditional rock instruments. A good concert activity led to Battiato being very popular as an alternative artist and Pollution even reached the Top Ten italian chart. These two albums are considered their best (and most musically accessible) from prog fans.

With third album, Sulle corde di "Aries", the sound shifted toward a more avantgarde style, but the long "Aria Di Rivoluzione" remains one of his best tracks from the first period.

Fourth album "Clic" was mainly instrumental, with just a single vocal track, "No U Turn", and it also had an english release on the prestigious Island label, though this album contains different versions of tracks originally included in "Sulle Corde Di Aries" and the italian issue of "Clic". His first solo album had also been recorded in an english version, entitled "Foetus", but this was never released at the time and only appeared on CD recently.

With 1975's "M.lle Le Gladiator" we're in full avantgarde music, the album even contains a long church organ solo performance and is a very difficult listen. After the Bla Bla's demise the following releases up to 1978 were all in the same direction, with long instrumental piano or synth performances closer to contemporary music than to progressive.