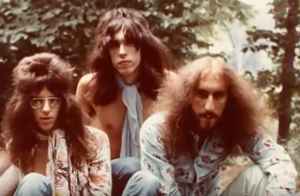 Profile:
Three piece U.S. hard rock outfit formed in 1969 that released two albums. At the time of their release, the albums were not successful but have grown to have cult status over the years.
Guitarist and vocalist Richie Wise went on to write songs and produce records for Kama Sutra with Dust (12) producer Kenny Kerner.
The pair went on to produce the first two Kiss albums.
Bassist Kenny Aaronson is a notable touring and sessions bass player having worked with Bob Dylan, Rick Derringer, Billy Idol and many others. He was named Bass Player Of The Year in 1988 by Rolling Stone. In 2015 Aaronson joined The Yardbirds.
Drummer Marc Bell joined The Ramones in 1978 and thus became Marky Ramone.
Sites:
Wikipedia
Members:
Kenny Aaronson, Marc Bell, Richie Wise
Variations:
Viewing All | Dust (12)
ダスト

October 8, 2019
an absolute killer band that time seemed to forget in the shuffle of the 1970s hard rock bands . highly recommended for both of the Lps.
Reply Notify me 1 Helpful