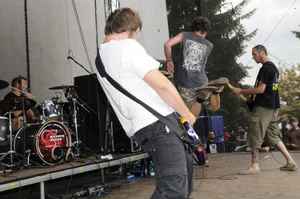 Profile:
Hardcore/grind band from The Netherlands (fryslan) !
Blood I Bleed started off right after My Minds Mine quit in 2002. BIB's style is full speed raging "1-2-3-go" thrash and is just a logical follow up of the later fast hardcore/grindcore assault, which MMM stood for. In 2003 their first self titled 7" EP was released and in the following years several split 7"s (Unholy Grave, Under Pressure) followed. In between those recordings, BIB did many gigs throughout Holland, Belgium, Germany and Czech Republic. In 2004 the band did their first tour through Poland with Third Degree (PL). The next year again recordings were made for split 7" EP's (F.U.B.A.R. and Krush). That summer Krush and BIB did an Eastern European tour through Germany, Poland, Czech Republic and Hungary. In 2006 a split 7" with their Japanese soulmates Sound Like Shit was released. In the same year Selfmadegod Records signed the band for a discography CD containing a big part of their vinyl releases and also including several unreleased tracks. After returning from a European tour with Drugs of Faith (US) in 2007 BIB started writing new material for the Gods out of monsters LP/CD. After the recordings the band did local gigs and once more visits Czech Republic, Germany and Belgium before writing new songs. In 2010 the split LP/CD with Massgrav was released. Currently the band is ready to mix and master new songs which were written for another split CD/LP release with Lycantrophy (CZ). The record will be released early 2012 on TGV.
Sites:
MySpace, Facebook
Members:
Bert (8), Henk (7), Rosco (3), Shantia