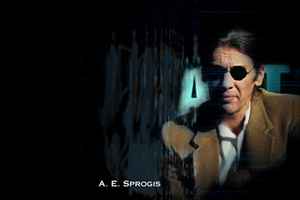 Real Name:
Arnold Sprogis
Profile:
A native of Toronto, Ontario, Canada, Arnold Sprogis grew up during the tumultuous cultural and political shifts in Canada during the 1960's and 70's and is somewhat a musical pioneer himself. Sprogis recalls borrowing an electric guitar and a reel-to-reel audio recorder during high school and reciting, or shouting rather, a poem to screeching feedback noise and taking that recording to school. The recording was well received by teachers and students who assigned him to a local poetry club During the 70's, he studied media arts at Sheridan College where he forayed into film-making and editing with a Super 8 camera, video recording/editing and audio production.

Arnold Sprogis was also a member of Toronto's The Music Gallery, the scene for creative live music, which comprised of improvised music, performance art, and avante sounds. Sprogis recorded UHFO group’s series of sessions (You Haven’t Found Out)

During the mid-to-late 70's, Sprogis met Newton Garwood, a Toronto-based early electronic musician who used modular synthesis, something expensive for the time and still to this day. Together they produced the early precursors of ambient music, though they did not call it that. To them, it was just a form of avante music. While the marketing term, Ambient, was freshly minted by Brian Eno in 1978, it would not gain true currency until over a decade later. Together Sprogis and Garwood recorded and produced music that was decades ahead of its time.

During the 80's, Sprogis then took electronics courses at George Brown College, which also involved computer logic. It was not until the 1990's that Sprogis then met musician, electro-ambient producer, Eric Hopper who went by the moniker, Sylken. Around this time, Sprogis acquired guitars, synthesizers, digital audio workstations, and began to produce his version of electronic-ambient music. This was a time of collaboration and co-writing songs with various artists.

During this time, Sprogis clued-on to the idea of taking The Music Gallery concept and introduced the idea of a weekly live ambient music venue in Toronto's artistic Kensington Market community. He dubbed the weekly event, 'The Ambient Ping' and it became the most successful and longest running event in Toronto of its kind. A wide range of local and international talent was showcased and the crowds grew larger. The idea continued on Brian Eno's idea of ambient, where the music could be both on the fore and background.

At the Ambient Ping, Sprogis went on to collaborate with artists on recorded and live performance with the likes of Sylken and Wally Jericho among others. Since then, Sprogis' music found its way onto ambient music compilations, documentary soundtracks and collaborative recordings. Sprogis currently prepares a series of albums for release, including the archival collaboration with Newton Garwood and his own upcoming full-length album, Sounds from the Unseen.
Sites:
sprogisaudio.com
Aliases:
Ambient-TV
Variations:
Viewing All | Arnold Sprogis
AE Sprogis, Sprogis