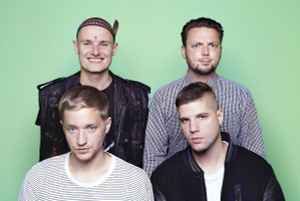 Profile:
German hip hop group, consisting of rappers Plan B (12) and Kaas as well as rappers/producers Tua and Maeckes.

The name "Die Orsons" (The Orsons) was first used from 2006 to 2008 for a number of tracks on which these artists collaborated and which were included on the members' releases ("Orsons kleine Farm" and "Orsons große Scheune" on albums by Maeckes & Plan B, "Orsons Saustall" on a KAAS mixtape). Since 2008, there have been releases officially credited to the Orsons name.

Their name refers to Jim Davis' comic strip "U.S. Acres" ("Orsons Farm" in Germany). Around the time of their first album, they humorously built a fake biography arond their band, saying that they were a boygroup of pigs living on a farm (Davis' comic strip depicts the life of farm animals, with the main character Orson being a pig). As a boygroup, each member had a specific "character" (for example, Tua was the "bad boy" of the group). They also had fictional villains, the group "Die Flic Flacs". However, this act was put down by the time of their second album.

Musically and lyrically, Die Orsons serves as an outlet for the artists involved where they can break free from certain restraints they have in their solo careers. Their music has many pop and rock influences and the lyrics often revolve around nonsense jokes, though their work since 2009 has also shown musical excursions into dubstep and more insightful lyrics. For example, they covered Soulja Boy's "Turn My Swag On", turning it into a slow ballad about the life of child soldiers.