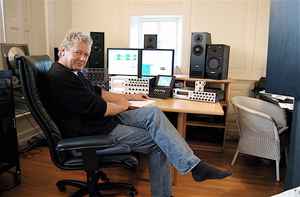 Real Name:
Jon Astley
Profile:
British record producer, recording and mastering engineer (* 1951 in Manchester, England).
He recorded and released two albums as a singer-songwriter in the late 1980s.
He worked on the staff of Olympic Studios in the mid-1970s before becoming a freelance engineer, and now is the owner of Close To The Edge Mastering in London, Twickenham.
He is married to illustrator & novelist Judy Astley. He is the son of Edwin Astley and the brother of Virginia Astley. Also, he is, by way of sister Karen, the ex-brother-in-law of guitarist Pete Townshend.
Sites:
closetotheedge.biz, soundonsound.com, Wikipedia, musicianbio.org
Variations:
Viewing All | Jon Astley
Astley, J. Astley, John Astley, Jon Ashley, Jon Astely

June 27, 2019
One of the most inconsistent mastering engineers out there. Sometimes his work is quite good with decent dynamic range and other times it's compressed within an inch of its life. It really just depends on the particular album and version you're talking about. I do not know if this is record label/management/band pressure to make things so compressed or the way he wants it. Caveat emptor, research before buying is my advice.
See 2 replies

Don't buy his remasters!! They sound awful, compressed, no noised to death, the have no dynamic range, it's painful to hear his CDs. Avoid him unless you want to have a headache!