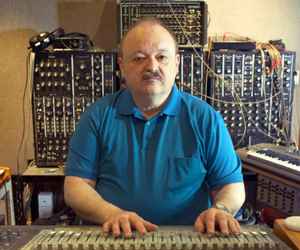 Real Name:
Daniel Pierre Lanckmans
Profile:
Belgium but born in Werl (Germany) in 1950
Synthesizer devotee who has had three major stages in his career: first as a solo artist (with Dan Lacksman Association), then as a member of the successful and witty Telex, and lastly as a producer and sound-engineer for a lot of projects in the nineties.
As a solo artist, he recorded 7 singles (and also one together with Two Man Sound, another Belgian group) and one album. The core of his sound was the Moog organ.
From the end of the seventies, Lacksman was the sound engineer behind the elektropop-pioneers Telex.
In the nineties, he came to the forefront once again through his work as a producer for the French project Deep Forest, a mix between the African chants of the rain forest and current technology. He produced their critically acclaimed and best-selling debut album (he took over a year to produce it), but decided not to cooperate with the group on their next recordings because "I wanted to get even more into the studio side of things. The others wanted to make Deep Forest a 'live' thing. I feel this kind of music stands on its own for what it is, exploring these great sounds. I consider the studio my musical instrument."
He then formed his own "exotic" project called Pangea. From the bio at Elektra : Pangea comes from the Greek word "Pan" meaning one. Gea comes from the Greek "Geos" meaning earth. The whole idea of "one earth," a sense of unity, that we are all unified, appeals to me very much. Combine that concept with my respect for technology - look at the internet for example and how it is making us all one continent again, in a way - and you can see where my ideas come from.".
In 1996, Dan Lacksman also produced the impressive and intriguing debut album of Ozark Henry.
Sites:
synsound.be, Facebook, houbi.com
Aliases:
Dan Lacksman Association, Discotheque Sound, Electronic Butterflies, Electronic Moog Hit Computer, Electronic System, Johnny Snack, New Electronic System, Pangea, Pop Corn (3), Syne Wave, Transvolta
In Groups:
1.4.9.2., Dan & Virginie, Dan Lacksman's Alliance, Darcman, Mad Unity, Telex, The Kiliwax's, Van Twist
Variations:
Viewing All | Dan Lacksman
D Lacksman, D. Lackman, D. Lacksman, D. Lacksmann, D. lacksman, Dan, Dan K. Lacksman, Dan Lachsman, Dan Lackman, Dan Lackmans, Dan Lacksman With Moog Synthesizer, Dan Lacksmann, Dan Laksman, Dan Lankmans, Dan Lanksman, Dan Laxman, Dan Laxmann, Dan Lecksman, Dan Packsman, Daniel Lacksman, Daniel Lasckman, Don Lacksman, Lackman, Lacksman, Lacksmann, Uncle Cyber "Dan Lax Man"