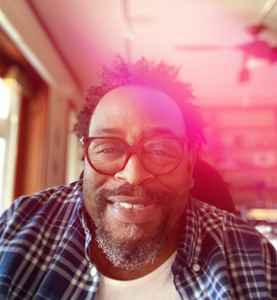 Profile:
Pierson was a keyboardist, autoharp, and SP-303/404 button smasher before becoming quadripelegic and transitioning to using Ableton and iPad apps and now identifies as a music producer. Co-founder of Subtle and 13 & God and associate/guest musician on various tracks by artists on Anticon. On Feb 24 2005, Pierson's neck was injured in a car wreck when he and his Subtle bandmates were touring in Iowa. The accident shattered his fifth vertebra, which paralyzed him from the chest down. After the dissolution of Subtle in 2008, Pierson returned with his first post-injury solo release,"Live in Oakland" on Ratskin Records in 2019 and the follow up on February 26 2021, "Nerve Bumps (a queer divine dissatisfaction)" on Dark Entries/Ratskin.
Sites:
linktr.ee, Twitter, Bandcamp, Wikipedia
In Groups:
13 & God, Conglomerate (2), Malcolm Mooney And The Tenth Planet, Subtle, The Why Because, Winfred E. Eye
Variations:
Viewing All | Dax Pierson
Dax, Dax Wentworth Pierson, Pierson