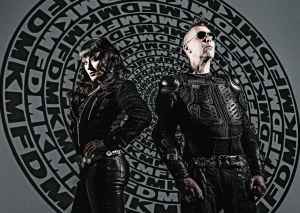 Profile:
Active since 1984, KMFDM are pioneers in the crossover between Techno/Dance/EBM electronics and heavy metal guitar samples. Born in Germany but then relocated to the USA, KMFDM released their first demo tape in 1984 and the first album "What Do You Know Deutschland?" in 1986. Heads of the band were Sascha Konietzko and En Esch. In 2000, the band changed to name into MDFMK and tried a contract with a major company. In 2002 they were back as KMFDM without En Esch.

May 17, 2017
Purveyors of the ultra heavy beat, and impressively going for 30 years in various incarnations with the one consistant factor that is captain k ( Sascha Konietzko ) who's vocal stylings are integral to the bands sound, there have been some notable high points (angst is a high water mark and is still hard and heavy after 20 years) & more influential than they are given credit for, other than the first 3 albums which are them finding their feet musically, every album is a worthwhile purchase, to quote the band "KMFDM will Never Stop"
Reply Notify me 6 Helpful

April 25, 2012
KMFDM is a Damn Good band!
Been one of my 'all-time-favourites' for years and the Mortal Kombat theme they did was Gold!!
Keep doing the good stuff! ^_^
Reply Notify me 1 Helpful

May 30, 2010
wow, no comment here yet! This is really a pleasure, for KMFDM is definately the most influental, native german (Industrial) Rock Group ever! For they brought me closer to electronic, experimental Rythms than any other act did! This is absolutely the biggest musical Influence in my life.
What did they not use in their tunes? If you only have a look at "VIRUS". This was the most weird mix of raggae and rock. I mean that freaky kind of style back in the late 80th, when there was no crossover at all! I am really thankfull to own nearly all albums. Without exaggeration I would mean that KMFDM did the same to modern alternative music than Pink Floyd did it back in 60th/70th.
Reply  See 3 replies Notify me 3 Helpful