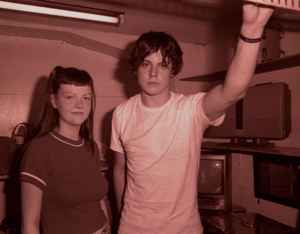 The band comprising the bass-free duo of Jack White (2) [vocals, guitar, keyboards] and Meg White [drums, percussion]. The Whites, once married and divorced in March 2000, formed their lo-fi garage band in 1997. They officially ceased to perform in Feb 2011.

Previously the guitarist in garage band The Go, Jack White's musical output in this fused twosome was heavily laced with folk blues, country, 60s Britpop and Broadway show tunes. Dressed in minimalist red and white outfits, the Stripes' striking stage presence was allied to their undeniable grasp of the rudiments of timeless rock music. Their debut was the 1997 single "Let's Shake Hands", followed by "Lafayette Blues" [Italy Records]. They then moved to the label Sympathy For The Record Industry and began to receive acclaim for their act and eponymous 1st album, mixing astute cover versions (Robert Johnson's "Stop Breaking Down Blues" and Josh White's "St. James Infirmary") with some devastating originals.

By the time of the following year's De Stijl [The Style], the media buzz surrounding the White Stripes had reached new heights. Of particular note was the duo's reception in the UK, where their music was lauded in national media, including The Daily Telegraph, The Sun and even Radio 4's Today programme - not normally known for its liberal music policy. The influential John Peel was quoted as comparing their importance to that of Jimi Hendrix and the Sex Pistols - although both those acts were originators, whereas the Whites clearly powerful interpreters. They certainly dispelled any question of hype, upon release of a third album, "White Blood Cells", followed by "Elephant" in 2003. The latter recorded at London's tiny Toe Rag Studios, using pre-60s analogue equipment and only eight tracks. Produced by Jack White, the highly-successful album offered a contrast to the digital conformity of music emerging in the new millennium, reaching the top-ten in the US & going platinum in the UK.
Sites:
whitestripes.com, Facebook, YouTube, Wikipedia
Members:
Jack White (2), Meg White
Variations:
Viewing All | The White Stripes
Las Rayas Blancas, White Stripes

August 24, 2021
Does anyone have any idea of a value for all 3 versions of Conquest on 7" all unopened with original seal still intact? How many full sets are there out there?
Reply Notify me Helpful

April 22, 2020
I miss the White Stripes. For me they were probably the greatest rock band of the 00's alongside Porcupine Tree. Every studio album of theirs has it's own individual feel, and while blues rock and garage rock isn't anything new, they had a style and sound that was very much their own. In addition to that, they were constantly able to build upon the sound they created, unfortunately disbanding whilst they were at their most experimental. I would've loved to have heard where their next album would take them, but as it currently stands, their short discography remains one of the most consistent of any bands and I hope it is never tarnished by a future reunion.
Reply Notify me 4 Helpful

The White Stripes are untouchable. The list of musicians that have graced the range of stages and audiences with the style and sheer gusto that are Jack and Meg, whatever the genre, is lined by names near turned to lore. Musicians who's visages come to mind when named quick as gods and movie stars. These musicians are few. They are far between. And, there is little doubt the White's rank among them.

Considering Jack alone, you are confronted with a creative force that has blazed a trail few could accomplish. His sonic assault's were boisterous. Mischievous as they were mysteriously magnificent. Molding and reviving classics in a way that few who have aspired to have matched. A man of stage and screen respected the world over. A self made man in the truest sense. A walking culmination of the American dream. A legend in his own time.

Then there's Meg. First sitting behind the kit only a few months before the Stripes began a deluge that lasted over a decade, she is one of the most powerful drummer's the world has ever known. Her seemingly simplistic sense of rhythm tantalized with the volume of a sledgehammer. Her torrential tirade echoing a thunder only Moby Dick himself might have bested, and only matched by Jack's electric at it's most petulant. Jon Bonham's angry vagina.

They had it all. The showmanship. The colors. The energy. The sound. Hailing from the heart of American muscle, they were synthesis of nearly every great American guitar-based style that had come before, coalesced in a single solution. They revved new life into rock & roll and did it better then some of the best. Let's not forget it was only the two of them them creating all that racket.

And, it was loud.

April 28, 2012
I'm not sure who wrote the profile of the band from which this is taken:

"The influential John Peel was quoted as comparing their importance to that of Jimi Hendrix and the Sex Pistols. The dispute here is that both these acts were originators, whereas the Whites are very good interpreters. There are just too many shades of early Kinks, the Doors, Television and late 60s American garage/punk bands to warrant a major place in twenty-first century rock history."

John Peel did not say they were originators, he said they were important. And quite rightly so. There is no better, or more invigorating, or important band since 2000. The Sex Pistols were not originators. There was nothing at all original about the Pistols - not in their music, attitude or dress. It had all been done by New York bands before them - The Ramones, Suicide, Television. That's without even considering the effortless nonchalance of The Velvets.

The White Stripes are the only rock and roll band of the 21st century. Live, they were astonishing.

John Peel knew more about rock and roll (and most other music styles) than anyone. If he said it, believe it.
Reply  See 2 replies Notify me 3 Helpful

The White Stripes would like to announce that today, February 2nd, 2011,
their band has officially ended and will make no further new recordings or perform live.

The reason is not due to artistic differences or lack of wanting to continue, nor any
health issues as both Meg and Jack are feeling fine and in good health.

It is for a myriad of reasons, but mostly to preserve What is beautiful and special about
the band and have it stay that way.

Meg and Jack want to thank every one of their fans and admirers for the incredible
support they have given throughout the 13 plus years of the White Stripes’ intense and
incredible career.

Third Man Records will continue to put out unreleased live and studio recordings from
The White Stripes in their Vault Subscription record club, as well as through regular
channels.

Both Meg and Jack hope this decision isn’t met with sorrow by their fans but that it is
seen as a positive move done out of respect for the art and music that the band has
created. It is also done with the utmost respect to those fans who’ve shared in those
creations, with their feelings considered greatly.

With that in mind the band have this to say:

“The White Stripes do not belong to Meg and Jack anymore. The White Stripes belong
to you now and you can do with it whatever you want. The beauty of art and music is
that it can last forever if people want it to. Thank you for sharing this experience. Your
involvement will never be lost on us and we are truly grateful.”