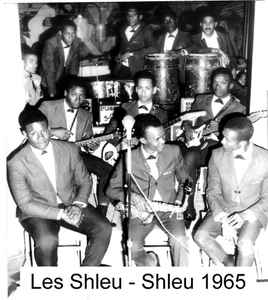 Profile:
Haitian compas band, formed the 22 December 1965 in Bas-Peut de Chose, Por-au-Prince by former members of the groupes Lorenceau and Memfoubins. In 1970 they were invited to NYC where they stayed in the Haitian diaspora. They are active till today.

Shleu-Shleu is a kompa band formed on 22 December 1965 in Bas-Peut de Chose, Por-au-Prince by former members of the groupes Lorenceau and Memfoubins, managed by Hugues "Dada" Jackaman (or Djakaman) an Arab Haitian businessman of Palestinian origin, and directed by Tony Moïse on the ashes of Les Manfoubins created by Jean Baptiste, Jacques Vabre, Camille Philippe and Kiki Bayard and Following the demise of Les Frères Lorenceau.[1] During their first appearance, Nemours Jean-Baptiste renamed them Mini Jazz, due to their reduced format, thus unknowingly coining the term mini-jazz, also referring to the mini-skirt fashion of the time.[2] The new band was composed of a solo saxophonist, Tony Moise, Jean-Claude Pierre-Charles (a.k.a. Peddy) and Hans Cherubin (a.k.a. Gro Bébé) on lead vocals. After living throughout Haiti, they achieved international notoriety, and in 1970, they were hired to travel to New York City to perform at Casa Borinquen. They decided to stay in NYC. They have played in many large American cities, spreading many of the musical gems of the Haitian diaspora. In 1976, many of the original members of the band had to leave New York for several reasons. This instability created a period of decline that lasted until 1991 when Jean-Baptiste Smith decided to revive the band with the addition of new musicians, such as the talented saxophonist Evens Latortue, guitarist Eddy Altine, percussionist Joseph Savius.