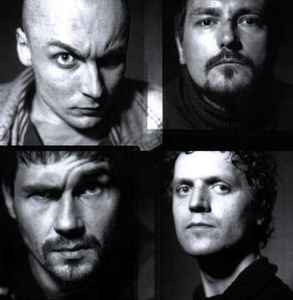 Profile:
Polish experimental metal band active in Warsaw in 1994-1998.
Kobong's music was impulsive and original played with a highly experimental approach. The band was described as the precursor of "hard playing" in Poland, and stated that their music was influenced by bands such as Meshuggah. But, in fact, Kobong recorded their debut album before Meshuggah released their second album, that defined Meshuggah's style.
Sites:
Facebook, MySpace
Members:
Bogdan Kondracki, Maciej Miechowicz, Robert Sadowski, Wojciech Szymański

March 20, 2019
I'm a big fan of Kobong evolving in Neuma! I tink the Kobong is born from the Jazz, Meshuggah form the trash metal. They are different enough
Reply  See 1 reply Notify me Helpful

November 26, 2018
After the fall of the Iron Curtain, Polish metal scene started being acknowledged around the world as pretty interesting, and some bands like Vader and later Behemoth really did develop their careers around the world. Too bad Kobong didn’t follow in their footsteps, as in my opinion their music is far more interesting than of those aforementioned bands. Maybe they were just too experimental and left-field for the mass listener? It has become somewhat of a cliché in Polish music press to herald these guys as progenitors of Djent, even preceding Meshuggah. Although it is true that their debut album (Kobong, 1995) was released shortly before Destroy Erase Improve (Contradictions Collapse doesn’t really fit in the equation, as it wasn’t well known in the world, and was pretty much a tech-thrash album), the band’s sound at that point had little in common with the mighty Meshuggah, let alone the whole “genre” of Djent. The musicians have always been pretty secretive of their influences, but it’s obvious that the sound of their debut owes more to Stravinsky (basic polyrhythms), Primus (slap bass), Voivod (weird chords and overall progness), with elements of Zeni Geva, 70s King Crimson and some hardcore bands. By the time of their second album (Chmury nie było, 1997) they have definitely heard of Meshuggah, as they cranked the aggression, polyrhythms and overall proggy vibe to 11. Unavailable for years, both their albums were re-released in autumn 2018 (the debut adds a bonus disc with a live performance from 1994), and are recommended to get if you not only like prog metal, but interesting music played with passion in general.
Reply  See 1 reply Notify me Helpful

November 19, 2017
In my opinion, Kobong does not resemble Meshuggah, the sound is quite different, more bass guitar played slape heard in Kobong, vocal lines arranged differently, only what connects these two bands are metal music ....
Reply Notify me 1 Helpful