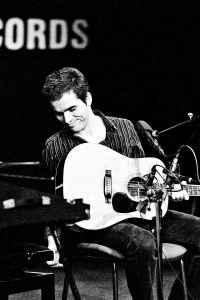 Profile:
Guitarist and keyboardist, mainly with Kevin Coyne, but also credited as a bassist and drummer.
Son of Kevin Coyne and husband of Wendy Coyne

Coyne is the son of the musician, painter and author Kevin Coyne, who died in 2004. In Germany Robert and his vocalist brother Eugene, the sons of Coyne's first marriage, appeared on some of their father's recordings including Tough And Sweet (1993) and Sugar Candy Taxi (1999). As a guitarist and multi-instrumentalist, Robert eventually joined his father's band and contributed to several further albums, including Room Full of Fools (2000), Carnival (2002), Donut City (2004) and One Day In Chicago (2005, with Jon Langford and the Pine Valley Cosmonauts).

Coyne has also worked as a musician with Eric Burdon, The Barracudas, The Scientists, Amy Rigby, Spooky Tooth, Sky Saxon and Chris Wilson of the Flamin' Groovies.

In 2006 Coyne provided the soundtrack for the Edinburgh Film Festival-winning documentary feature The Great Happiness Space, and in 2007 released his first solo album Death Is Not My Destiny, on which he sang for the first time. The following year, he founded "The Robert Coyne Outfit" to present his music on stage.

In 2010 Coyne released the album Woodland Conspiracy, accompanied only by his guitar and on some tracks by a Fender Rhodes piano.

With Jaki Liebezeit, the drummer of the avant-garde band Can, he recorded the album The Obscure Department in 2013. Two more albums with Liebezeit, Golden Arc (2014) and I Still Have This Dream (2016), followed. Last Lion, another solo album, was also released in 2016.

Drawings by Coyne, drawn when he was aged about 10, feature on the cover of his father's 1980 album Sanity Stomp.[4] He has also drawn the artwork for the covers of several of his own releases.
Sites:
robertcoyne.net, Wikipedia, Bookogs, Wikipedia
In Groups:
Barracudas, Silver Chapter, Venus Ray
Variations:
Viewing All | Robert Coyne
Coyne, R. Coyne, Rob Coyne