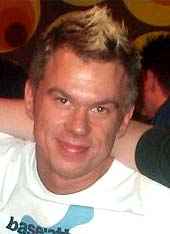 Real Name:
Andrzej Hołubowicz
Profile:
Acid/Hard Trance DJ & producer from Gliwice, Poland.
In late 2000, he started project Base Attack together with Paweł Mildner. In late 2003, their track "Everybody" was noticed by DJ & producer Flashrider (aka Sebastian Kaizik). Thanks to him, the track was re-produced in Germany and renamed to "Nobody Listens To Techno" featuring vocals by Kid Panic and Eminem, enabling it to successfully climb in German and other European DJ charts.
In 2004 Paweł Mildner left the project, letting Base Attack as a solo project and alias of Andrzej Hołubowicz.
Contact: [email protected]
Sites:
MySpace, Facebook, YouTube
Aliases:
Andrzej Hołubowicz
Members:
Paweł Mildner
Variations:
Viewing All | Base Attack
Base:Attack, Baseattack

October 4, 2003
This song is highly energetic with pumping basslines, razor-edged synths, pounding rhythms and lots of phat beats. "Nobody Listens To Techno" was originally Eminem's statement in the song, Without Me. Base Attack have enhanced and expanded on the concept.