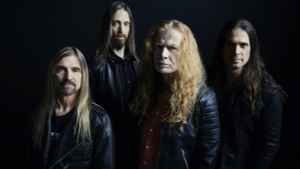 The band was formed by guitarist/vocalist Dave Mustaine and bass guitarist David Ellefson in the year 1983. Despite many line-up changes, Megadeth is partly responsible for the popularization of thrash metal in the late 1980s. The band was also notorious for its substance abuse, a contributing factor to their continuous revolving door of band members. The group nonetheless found sobriety and a stable line-up with 1990 release Rust In Peace, a trend which continued until 1998 with the departure of drummer Nick Menza. During that period, the band released four studio albums, including Countdown To Extinction, which is Megadeth's most commercially successful album.

Dave Mustaine disbanded Megadeth in 2002 due to a nerve injury he had suffered on his left arm. Following a year of physical therapy Mustaine began work on what was to be his first solo album, however contractual obligations forced The System Has Failed to be released under the Megadeth name, following which, Mustaine decided to reform the band in 2004. The band has since released five studio albums, but continued to have several line-up changes through 2000s and 2010s, with Mustaine remaining the only constant member. Co-founder Ellefson, who took legal actions against the band during the disbandment, rejoined in 2010 but was fired from the band in 2021.

Proper vinyl reissues for Youthanasia and Countdown To Extinction. The originals are not affordable and I'm not a big fan of picture discs, which are apparently expensive as well (*sigh*). Please.

November 8, 2020
I just want Youthanasia on vinyl and not a picture disc

July 3, 2018
Can we please have a "for the first time on vinyl in the USA series"? There's a whole lot we've missed and forgive me if I don't count picture discs.

As one of the big 4 in the early/mid 80s thrash scene - the others being Metallica, Slayer, Anthrax. Megadeth set the standard in terms of pure speed and technical ability.

The 1st 3 albums: Killing Is My Business, Peace Sells and So Far, So Good are flawless slices of speed metal perfection - but avoid the 2004 remasters like the plague as they smooth off the edges just a tad too far and distract from the raw energy and aggression of the original releases.

If Mustaine had stayed with Metallica would they have had a highly suspect commercial 90s? I think not ;) In many ways Megadeth are the band Metallica should have been - look no further than Kill 'Em All for all the proof you need.

March 10, 2008
Although nowhere close to the sound they started with, Megadeth will always remain one of the most instrumental bands in the metal genre and enough praise cannot be given to the early 90s lineup of Mustaine, Ellefson, Friedman and Menza. No other ensemble of musicians was able to capture the skill and intensity of these four in terms of "technical metal." While my personal favorite will always be Rust in Peace, one of the crowning achievements in metal, anything up to Youthanasia can be put on a pedestal as an example for others to try to match. My memory of Megadeth will never be tarnished by the commercial stuff after the mid 90s, you can't take away the genius from before!
See 3 replies