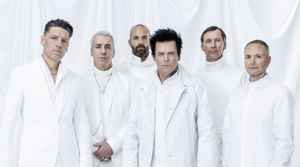 Rammstein were among the founding bands of a German/Austrian subgenre in the mid-1990's where industrial rock and (groove) metal were mixed in a vein that became known as NDH, Neue Deutsche Härte (New German Hard), clearly inspired by industrial acts like Laibach, Die Krupps and Ministry, but also metal bands like Pantera and Sepultura. The majority of their songs are in German, but they have also performed songs entirely or partially in other languages, including English, Spanish, French and Russian. Rammstein's award-winning live shows are known for their pyrotechnic elements and both on and off-stage theatrics, and nowadays, they call their music Tanz Metal ("Dance Metal").

There has been some controversy around their name. During their formative years 1993/94, they were throwing out names while in Feeling B's tour bus, and someone wrote Rammstein Flugschau ("Rammstein Air Show") on the wall. Ramstein Air Base outside Kaiserslautern in southern Germany is mainly the headquarters for the US Air Forces in Europe and Africa. In 1988 there was a horrible accident during an Italian air show that killed 70 people. They contemplated other names, like Milch (Milk), Erde (Earth) and Mutter (Mother), but the misspelt Rammstein stuck with them. They have long since distanced themselves from the old name and story.

July 8, 2019
Rammstein to me will always be the poor man's Laibach. Their sound and imagery always looks and sounds to me to be just a more diluted and acceptable obviously marketed at the USA type rock.
Even looking at videos of their fans they seem to attract fans of Teutonic possibly fascistic rock. (Even if the band don't want that image that seems to be the average American fan base.)
Musically they are ok if a light more pop orientated hard rock. Think of them as a Twisted Sister for the 2k era.
Best listened to with videos imho to get the full impact. Why they and more bands do not release video lps only is beyond me as the image is what they are selling before and above the music.
See 3 replies

February 16, 2018
What can you say about this band that has NOT been said. Have been into Rock / Metal and everything in between since 1976 and I can honestly say that this band are absolutely BRILLIANT. Have seen them in concert halls and outside gigs and they have NEVER put on a bad show.
Possibly the best live event you will ever see but be warned, you may need to see a doctor after the show to get your senses back to normal. Miss them at your peril.

I don't think there will ever be a band which comes close to this band. Many rip offs but none who manages to keep up with them.
Pretty much every of their tracks is great. There was no track which felt bad or boring. Well ok, maybe Pussy.
Every of their releases is a damn diamond and people who dont know them must have lived below a rock in the last 20 years.

Can't await them to release their next album. I am really hyped and hope they can reach LIFAD at least.