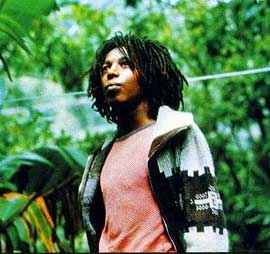 A teenage prodigy who made one of the great Roots records "Africa Must Be Free By 1983" at the age of 16. Although produced by Augustus Pablo Mundell wrote all the tunes, thereby earning himself the nickname of "The Blessed Youth"

Introduced to reggae by a friend of the family, Boris Gardiner Mundell recorded his first session at the age of 13, and at the time of his death had produced 5 LPs and numerous singles.

What seemed likely to be a brilliant career was cut short when Mundell was shot in a car he was travelling in with Junior Reid. Accounts of the incident are muddled, with some accounts reporting that it was over an argument about a fridge, others that it was in revenge for a burglary, others still that it was over a woman. Whatever the reason, his death robbed the world of reggae of a shining light.
Sites:
Wikipedia
Aliases:
Jah Levi (2)
Variations:
Viewing All | Hugh Mundell
H Mundell, H. Mundall, H. Mundell, H.Mundell, Hugh Mandell, Hugh Monday, Hugh Mondell, Hugh Moundell, Hugh Mundel, Hugh Mundll, Hugh Tahair Mundell, Mundell, U Mundell, U. Mundell