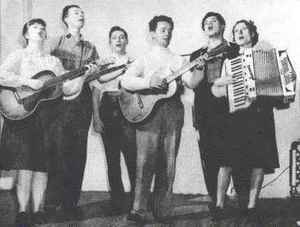 Profile:
The Almanac singers were an American folk vocal group, active in the early 1940's.

At various times the group was joined by such other performers as Cisco Houston, Josh White, Bess Hawes, Butch Hawes and Earl Robinson. Part of the time, the Almanacs consisted only of Pete Seeger and Woody Guthrie.