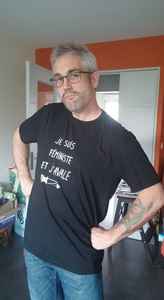 Real Name:
B. Benard
Profile:
French rave activist and hardcore producer.
Revision's tracks reflects his atypical personality: sick broken hardcore strewn with shifted vocals; little melodies that seem straight out of Creepshow; recurrent looped incantations - 'man is the architect of his own destruction'- that lend the whole album a rather spooky vibe. A surprising, violent, uncompromising blend.Revision had been mixing house and garage at small parties when he attended Plastikman's performance in Vincennes in 1996. A slap in the face that threw him into techno until he met the Klynical Sound System collective, who introduced him to gabber and the most extreme sounds.
A computer programmer during the week, Revision started to play around with sounds at week-ends, never taking himself seriously: "it's only about fitting little coloured squares in programmes that are not even paid for..."
He doesn't think in terms of music influences or inspirations. For him, electronic music is about science and technology, something rather diffuse with the power to send a whole dancefloor into trance, as he himself did countless times, mixing at raves nationwide.
Sites:
ozore.org
Aliases:
Benjamin Bénard
Members:
M. Bass
Variations:
Viewing All | Revision
Ravision, Rev 1.1, Revision 1.1, Révision 1.1