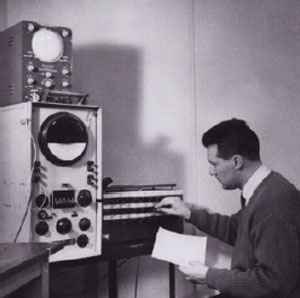 Arsène Souffriau gets a classical musical education at the Royal Music Conservatory in Brussels. Between 1939 and 1943 he studies harmony, musical history and clarinet and from 1942 to 1948 composition, counterpoint, fugue, orchestration and music theory.

In 1950 he founds the Chamber Orchestra of Brabant and conducts several pieces. During these years he starts to be interested in music for films, documentaries and theatre. In this period he also starts to work as the chief sound engineer for the Belgian Television (where he will stay until 1985).

At the Brussels World Exhibition in 1958 he meets Pierre Schaeffer and Henri Pousseur. The latter offers him studio time during the late hours at his APELAC studio in Brussels. Here, Arsène starts his first experiments in electronic music and musique concrète together with Henri Pousseur and Leo Küpper.

Due to the lack of other electronic music studios in Belgium and given the advantage of having a studio of his own, he sets up his own studio BIMES (Bureau d'Illustrations Musicales, Electroniques et Sonores) in 1959. At this studio he has recorded all of his own work since.
In Groups:
The free pop electronic concept
Variations:
Viewing All | Arsène Souffriau
A. Souffriau, Arsene Souffriau