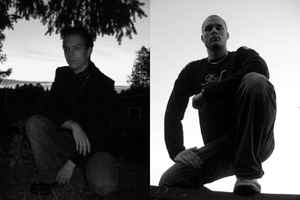 They both were born in 1985. They started going to school in Hammaslahti's elementary and they became friends at third grade. Sakke got his own drum set at the age of 8, and started to take lessons. He got into the conservatory of Joensuu when he was 12. After three years he got bored and even sold his drums, but obviously that wasn't the end of his career as a musician. He got Fasttracker 2 - module tracker at the age of 11 and learned how to make music with it.

Jone's interest in music started when he was 10 years old and got his first keyboard, and after a year he started to take lessons in Hammaslahti, and also started to play guitar on his own. Later he got an electric guitar, and when he was 15, he got into Joensuu's conservatory as a guitar player. It was Christmas 2000 when Jone's parents finally bought a PC, and of course, Jone wanted the Fasttracker 2 too.

At the beginning of 2002, they finished a tune called "Dragon members". The style was something like instrumental eurodance. Sakke thought it was pretty nice and suggested making a whole album of dance music. Jone was okay with it, and the project was named "Electron". After a year, they finished 11 tracks. Their style changed during the album more into synthpop/spacesynth. They finished their "first" (unofficial) album (Dragon Members) in 2003. Their first official album "Tides Of Darkness" was released on Alpha Centauri -record label in October 2006.
Sites:
mikseri.net, MySpace
Members:
Jone (6), Sakari Törmänen