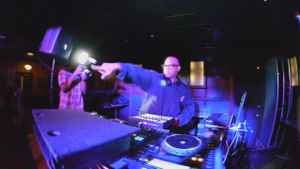 Tony Nova, professionally known as Tony Brown, is an electronic music producer, musician and DJ.
Tony Nova specializes in deep house, afro house, and tech house or any type of jazzy smooth groove.
He has won an Emmy Award as well as other awards for audio production and broadcasting.

T.B.C. or Tony Brown to those in the electronic music industry, had signed a a three-year deal with Rocky Jones from DJ International Records which consisted of three releases per year and a thousand dollars per track, which was quite a decent amount of money for house music in the early nineties.
He has been working with many producers, namely Rocky Jones, Joe Smooth, Craig Loftis, Jes One, Chez Damier and many more.

After “The Way You Move,” on DJ International Records, which featured Jessica Tuttle and MC D, Brown joined up with his brother, Unsel Brown and formed the Brown Brothers. A record was released on Many Mokiers between 1993-1996.

Between 2001 and 2008, Tony worked and recorded under the direction of Ron Murphy, the mastering engineer at NSC, while releasing music on NSC Records and Fullpress Records. Since 2008, Tony Brown has been managing the NSC catalog along with running media site DanceDance.com.